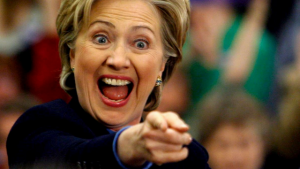 Poor Hillary. Whenever she tries to be witty, she usually falls flat on her face.

I mean, to begin with, she has a bizarre tendency to use phrases that aren’t actual phrases. The right latched on to the “deplorable” label, but in my humble opinion, we didn’t spend enough time chiding the twice-failed Presidential candidate for the fact that “basket of deplorables” isn’t a thing anyone says.

And who remembers “bimbo explosion”, the cute little way Hillary described the women accusing her husband of sexual impropriety when he was President?

Also not a thing.

Her latest stab at being clever was at least based on common word usage, but it was so bland it makes one realize why she usually opts for weird, made-up expressions that no one uses.

Just ahead of Trump’s Helsinki meeting with Putin, Hillary joined the gaggle of leftists who are pestering the President to confront Putin on alleged Russian campaign meddling, and to be fair, as the candidate who lost to Trump, she definitely has a dog in the fight.

She’s also likely quite eager to join the narrative that Trump and Putin are BFFs considering her own shady history with the Russian government and Russian oppo research. Just saying.

To add some perceived pizazz to her comments, she made an oh-so-topical reference to the World Cup, showing she is not only human but also knows what is trending on the social medias. Isn’t she authentic?

“Great World Cup. Question for President Trump as he meets Putin: Do you know which team you play for?” she Tweeted on Sunday.

Great World Cup. Question for President Trump as he meets Putin: Do you know which team you play for?

Ooooh, I get it! Because Trump is Putin’s political lapdog, right?

She might be aware that there has been large global sporting event afoot, but she clearly missed his comments at NATO last week in which he slammed other member-states for relying on Russia.

And I guess she wasn’t paying attention when he twice attacked bases in Russian-allied Syria?

And perhaps her handlers just haven’t had the heart to tell her how much Russian collusion keeps inconveniently leading back to her campaign.

Or that Peter Strzok was just slammed by Republican members of Congress on Thursday for cooking up the whole Russia collusion narrative in an apparent attempt to get her elected.

To be fair, the majority of her supporters probably don’t know any of these things either, so to the quickly diminishing demographic of people who pay attention to what Hillary Clinton thinks about anything, none of this matters.

We can just let her live in her fantasy world in which she is both clever and politically relevant, can’t we?