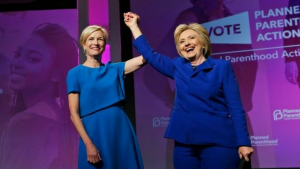 Hillary Clinton and Planned Parenthood are good buddies. They even gave her the Margaret Sanger award in 2009, which is an award they give women who remind them of the racist eugenicist who wanted to sterilize minorities and the “unfit” (in other words, the perfect award for Mrs. Clinton.)

So when Cecile Richards, president of the famed abortion chain for 12 years stepped down from her post of Chief Baby Killer–oh wait, sorry, the official title is “president”–of the organization this week, Hillary wanted to make sure to send her off with a fitting tribute, which she did via Twitter.

And then things quickly went South.

Thank you @CecileRichards for your extraordinary leadership over the last 12 years as president of Planned Parenthood – and for getting up every single day to fight for a world where women's rights truly are human rights. #ThankYouCecile pic.twitter.com/Mq6Q2KtNaq

“Thank you @CecileRichards for your extraordinary leadership over the last 12 years as president of Planned Parenthood – and for getting up every single day to fight for a world where women’s rights truly are human rights. #ThankYouCecile,” wrote the woman we so narrowly avoided electing as President.

It wasn’t long before Twitter went to work on the “champion of women”, who probably should have thought a little more carefully about how she chose her words, as the only “right” Planned Parenthood has any interest in is the right to murder human babies.

Users were quick to point out the former FLOTUS’ failure to mention the rights of the millions of women and humans who have been aborted by the for-profit abortion clinic.

Unless you're still in the womb. 😡

And for killing millions of kids

What a sad statement. Where is the respect and compassion for human babies. This is a barbaric process. Just watch once abortion and then deny it is taking a life. #Horrible

“The aborted babies couldn’t be reached for comment,” one user grimly quipped, while others pondered just how many women and humans had been deprived of their right to life under Richards’ leadership at Planned Parenthood or simply shook their heads at the disgusting double-standard.

Her tweet was not without support, of course, no doubt from some of the snowflakes you might remember bawling on the fateful evening of November 4th, 2016.

And thank you Hillary for continuing to fight for the women and children of this country, even if the current administration doesn’t want to. Your voice is needed in this political climate.

“And thank you Hillary for continuing to fight for the women and children of this country, even if the current administration doesn’t want to. Your voice is needed in this political climate,” wrote one starry-eyed fan, although it was quickly called into question whether or not this young lady knew what abortion actually was or whether or not she was qualified to speak on behalf of women and children.

Fighting for children? Hahaha do you even know what an abortion is?

Fighting for which children? The dead ones?

This is probably one good reason Big Tech is working hard to censor conservative voices–without social media platforms like Twitter, politicians could just go on spreading their bull to the public and giving the impression it actually meant something.

Sorry, Hillary, you’re not getting away with your lies today, you’ve been had by the twitterverse.