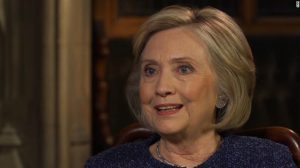 You know, if I were Hillary Clinton, I’d probably steer clear of ever commenting on public sexual misconduct allegations ever again.

This is definitely a topic you think she’d sit out, just for the sake of saving face.

But as we have learned over time, the only reason this woman has been as successful as she has been in the world of politics, she has absolutely no shame. And apparently not much tact, either.

In a recent interview with CNN, she boldly denied that there’s any comparison between allegations made against her husband and those made against Trump or Kavanaugh.

Well, because Bill was the victim of a right-wing conspiracy, of course!

In the interview, she rejected any comparison between her husband’s alleged behavior and Trump’s, arguing that Bill came out better by comparison.

“There’s a very significant difference, and that is the intense, long-lasting, partisan investigation that was conducted in the ’90s,” Clinton said.

“If the Republicans, starting with President Trump on down, want a comparison, they should welcome such an investigation themselves,” she said.

She also praised her husband’s resilience.

“Bill had to be incredibly strong,” Hillary said. “First to get elected, then to get re-elected, and to survive.

“And it was not easy, by any means, obviously. But he really believes that Democrats had to be tougher and stand up to the bullying and the intimidation.”

Clinton doesn’t just play the world’s tiniest violin for herself, her husband and their collective legacy; she has a collection of microscopic Stradivariuses perfectly tuned for each possible occasion — and when it arises, she produces that precise instrument and Itzhak Perlmans that bad boy until even I almost feel sorry for her.

Tell me about it.

The logic here, of course, is that Trump is guilty because the accusations against him weren’t politically-motivated (?!?!?!), but Clinton was a Democrat so naturally he’s innocent.

This is nothing surprising to conservatives, as we’re all aware this is how Democrats view allegations of sexual assault.

It is still, of course, a glaring double-standard.

When it comes to conservatives like Trump or Supreme Court Justice Brett Kavanaugh, all women are to be believed. After all, what reason do they have to be lying? When it comes to her husband, however, they’re all just prevaricating floozies, likely put up to it by some member of the vast right-wing conspiracy who’s no doubt out there somewhere twirling his mustache and smoking a cigar he lit with a T-Bond.

Clinton said her husband was “standing up to bullying and intimidation” when he fought allegations by Broaddrick, Paula Jones and Kathleen Willey. And she said this just days after she declaimed Kavanaugh “deserved laughter” for even intimating the accusations against him might have been out of vengeance.

You could perfectly mirror the attacks on Clinton with those on Kavanaugh, regardless of whether or not either man is innocent of unwanted sexual advances.

Both accusations were motivated by political opponents with a very clear goal in mind.