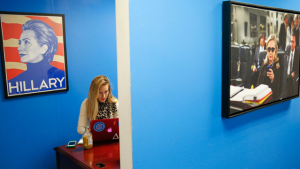 Whatever it is she’s doing in the no doubt dark, smoke-cloud room she plots her global takeover from, the office is in need of interns.

So…you can pretty much work for Hillary Clinton for free so you can put it on your resume that you once answered phones at the office of the politicians with one of the most legendary failed Presidential campaigns in US history.

Then maybe you can get a job working for Elizabeth Warren or Bernie Sanders once they fail to win the Presidency in 2020.

The Daily Caller has the story:

Hillary Clinton is hiring a batch of unpaid interns for the fall to work in her New York City office, according to documents obtained by The Daily Caller News Foundation.
Applications are currently being accepted on a rolling basis and will “run from September to mid-December.” The internship requires “a minimum of three days per week,” and undergrads “of all majors are encouraged to apply.”

While the amount of hours per day aren’t specified, the “internship is unpaid.”

“Interns will provide support to our staff, assisting our work on a wide range of projects. Work will include but will not be limited to: compiling press clips, monitoring social media, conducting research, drafting correspondence, and assisting with office management,” the job posting states.

Clinton’s office is looking for applicants who have “a high level of professionalism and discretion,” “strong research and writing skills,” “the ability to work collaboratively as part of a team,” “strong interpersonal communication skills,” “a diligent work ethic and a sense of conscientiousness,” as well as “enthusiasm, dedication, and a positive attitude.”

You’ll definitely need a positive attitude to get up and go to a job that doesn’t pay you, especially when the person you’re working for is most likely running an international money laundering scheme and makes millions on book sales, speaking engagements, and consulting gigs!

If you’d love to work for an elderly, authoritarian politician but you really can’t survive without at least some compensation for ramen noodles and cat litter, you could try Bernie Sander’s campaign, which, the Daily Caller notes, pays a scant $10.10 an hour.

I guess the fight for $15 stops where a Democratic socialist’s bid for presidency begins.