Hillary Clinton Won’t Back Bernie: “Nobody Likes Him Or His Supporters” 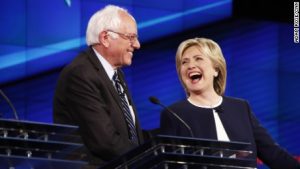 History is repeating itself, and the old-guard Democrats are reigniting their war on radical socialist Bernie Sanders as he inches closer to the primaries alongside Elizabeth Warren, Joe Biden, and a shrinking roster of other candidates.

Former first lady and twice-failed presidential candidate Hillary Clinton slammed Sanders in a Tuesday interview with The Hollywood Reporter, saying no one likes him or his supporters and that she won’t commit to backing him should hell freeze over and he secure the nomination.

Clinton’s interview was largely centered around “Hillary,” a new Hulu miniseries in her honor.

THR asked Clinton about her assessment of Sanders in the documentary, quoting her as saying, “He was in Congress for years. He had one senator support him. Nobody likes him, nobody wants to work with him, he got nothing done. He was a career politician. It’s all just baloney and I feel so bad that people got sucked into it.”

Clinton responded, “Yes, it does.”

“It’s not only him, it’s the culture around him,” Clinton continued. “It’s his leadership team. It’s his prominent supporters. It’s his online Bernie Bros and their relentless attacks on lots of his competitors, particularly the women.”

“And I really hope people are paying attention to that because it should be worrisome that he has permitted this culture — not only permitted, [he] seems to really be very much supporting it,” she went on. “And I don’t think we want to go down that road again where you campaign by insult and attack and maybe you try to get some distance from it, but you either don’t know what your campaign and supporters are doing or you’re just giving them a wink and you want them to go after Kamala [Harris] or after Elizabeth [Warren]. I think that that’s a pattern that people should take into account when they make their decisions.”

Clinton later told THR that she has “practically” talked to and advised all the Democrat presidential candidates who are running, except for Sanders.

When if she would endorse and campaign for Sanders if he landed the nomination, Clinton hesitated, saying “I’m not going to go there yet” due to the ongoing primary season.

I think it’s abundantly clear that the deep state Dems have no interest in letting someone like Sanders run the show. That just leaves us wondering, who will be the party’s Chosen One? Handsy Joe, or Lie-awatha? What do you think?