Hillary Clinton: ‘We Have To Be Ready’ For The Possibility Trump Won’t Leave Office If He Loses In November 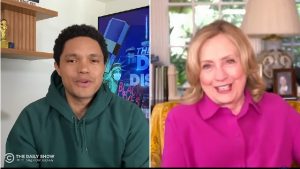 Former Secretary of State Hillary Clinton, who got her butt handed to her in the 2016 presidential election, is apparently still bitter over her loss to Donald Trump because she’s now resorting to pushing conspiracy theories about him not leaving office if he loses to Joe Biden later this year.

Clinton made her comments during an interview conducted by that hero of modern journalism, Trevor Noah, who replaced Jon Steward as the host of The Daily Show. Topics discussed include mail-in ballots and voter suppression.

Noah asked Clinton if there was a scenario she could envision in which the president loses the election but argues that a couple instances of voter fraud are enough to invalidate of the election results.

“Well, I think it is a fair point to raise as to whether or not, if he loses, he’s going to go quietly or not. And we have to be ready for that. But there have been so many academic studies and other analyses, which point out that it’s just an inaccurate, fraudulent claim,” she said in reference to Republican claims about the potential for widespread voter fraud via mail-in ballots.

“Look, I want a fair election. If people get to vote and they, for whatever reason, vote for Donald Trump, OK, we’ll accept it. Not happily,” the former secretary of state added, before noting that she doesn’t expect the president to win reelection if more people can vote in-person or by mail.

Am I the only one that busted out laughing at the idea the left would accept a second Trump victory should he get reelected this fall? There’s zero chance these folks would just “accept it” if Trump wins. No, they’ll riot, loot, burn cities to the ground and then the Deep State will ramp up efforts to craft narratives and crises to try and get the president to make a misstep they can use to boot him from office.

Clinton is so insincere in that comment, such a bald-faced liar, it’s impossible to believe a single word that comes out of her mouth.