Hillary Clinton: “There Needs To Be A Rematch. Obviously, I Can Beat Him Again.” 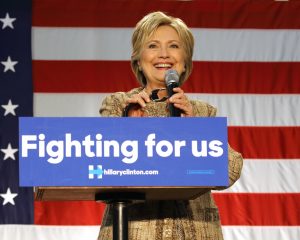 The 2020 Democrat lineup is already full of enough certifiably crazy folks—why don’t we add some criminals to the mix!?

In a Tuesday interview with PBS, twice-failed presidential candidate Hillary Clinton not only claimed that she “beat” Trump in the 2016 election, she repeatedly teased that she could take another whack at the big show in 2020.

Can this lady breathe without lying?

“I think that crooked Hillary Clinton should try to enter the race to try and steal it away from uber-left Elizabeth Warren,” Trump tweeted earlier that day. “Only one condition: The crooked one must explain all of her high crimes and misdemeanors, including how and why she deleted 33,000 e-mails.”

“You know, it truly is remarkable how obsessed he remains with me,” Clinton said. “But this latest tweet is so typical of him. Nothing has been more examined and looked at than my e-mails. We all know that.”

“So maybe there does need to be a rematch. Obviously, I can beat him again,” Clinton claimed. “But, just seriously, I don’t understand, I don’t think anybody understands what motivates him.”

Hillary Clinton coming down with a strong case of Stacey Abrams Syndrome and claiming she won the 2016 election. pic.twitter.com/uTSj72IMN0

Anyone else remember when, just before election day, Clinton said that it is “direct threat to our democracy” to say you won’t respect the results of an election?

I'm old enough to remember that distant time (checks calendar) three years ago when Hillary Clinton said not accepting the results of an election was a "direct threat to our democracy" pic.twitter.com/KtIcZHwtyS

Parkinson also directed folks back to the first presidential debate, in which Clinton said: “Well, I support our democracy. And sometimes you win and sometimes you lose, but I certainly will support the outcome of this election. And I know Donald is trying very hard to plant doubts about it, but I hope the people out there understand this election’s really up to you. It’s not about us so much as it is about you and your families and the kinds of country and future you want. So I sure hope you will get out and vote as though your future depended on it because I think it does.”

At the first 2016 debate, Clinton said that she would "support the outcome of this election."

She also said that the election was about the people and not about her, but I think we all know how she really feels about that. pic.twitter.com/vCTl7JtBT6

And let’s not forget about those “deplorables,” y’all.

Clinton not only refuses to truly accept the result of the 2016 election (i.e. she lost), but she disparages the people who didn't vote for her, like last year when she called most of the states in our nation "backwards" and implied they were racist and sexist pic.twitter.com/5MGNkabjg7

Later on, Clinton, or perhaps the stone-souled harpie tasked with managing her social media, later responded to Trump’s tweet directly:

Don’t tempt me. Do your job.

So, wait, let’s get this straight. Clinton wants Trump to do his job? The job she says he’s landed by sordid, illegitimate means?