Hillary Clinton On Joe Biden’s Handsiness: “Get Over It. Vote For Anybody To Get Rid Of Trump” 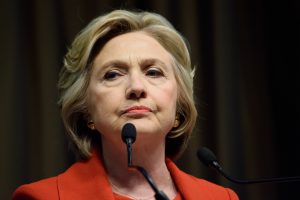 To be filed under “Things That I Trust Less Than Gas Station Sushi,” alongside the Warren Report and my toddler when she tells me she identifies as a dinosaur, is Hillary Clinton’s official statement on damn near anything.

The former first lady and Secretary of State, however, had something pretty startling to say about presidential candidate Joe Biden’s creepy, seemingly unabated fondness for feeling ladies up: get over it, because Trump is worse.

In a joint interview with her daughter, Chelsea, for PEOPLE, Clinton suggested that virtually anyone who attempts to run for president can have an annoying habit that can be “picked apart,” but that none of that matters when you’ve got an orange man to oust.

Clinton was quick to jump in when the interviewer asked if women might be less enthusiastic about voting for Biden given his history of handsiness.

“For goodness’ sake, I’m sorry, I have to jump in because I’ve heard a little bit about that,” Hillary said. “I mean, I don’t think that the Twitterverse is the American electorate, but there are lots of vocal voices that say all kinds of things.”

“[Biden] is a thoroughly decent human being who has served our country honorably and well for decades,” she continued. “You could take any person who sticks their little head above the parapet and says, ‘I’m going to run for president,’ and find something that … a little annoying habit or other kind of behavior that people are going to pick apart and disagree with.”

“This man (Trump) must be defeated. People who are putting themselves forward, which believe me, is a really difficult process to undergo, should be judged on the totality of their lives and their service,” Hillary said.

“We can pick apart anybody,” the former Secretary of State reiterated. “I mean, that’s a great spectator sport. But this man who’s there in the Oval Office right now poses a clear and present danger to the future of the United States. So get over it.”

So, in Hillary’s estimation, we must “get over” a dude who was accused of sexual harassment by former Nevada Democrat state Senator Lucy Flores, who says Biden stood behind her, “inhaled [her] hair,” and proceeded to plant “a big slow kiss on the back of [her] head.

The same dude who has been accused by a slew of other women of “inappropriate touching” needs to be given a pass because “believing women” is not as important as ousting the president by any means possible.

The same dude who, just weeks after issuing a laughable, tone-deaf apology for his behavior, was recorded making creepy statements and squeezing the shoulders of a ten-year-old girl at a campaign event needs to have his faults overlooked so Trump can be defeated.

How hilarious that the same woman who, at the height of #MeToo hysteria, declared that all survivors of sexual assault have the right to be “heard” and “believed” is the same woman with such a stellar track record of defending men, including her husband, repeatedly accused of misconduct for political expediency.

Why do any women on the left take Clinton seriously? The world may never know.