Hillary Clinton Gives Campaign Advice To Trump’s Hopeful 2020 Opponents So They Can Lose Miserably, Too 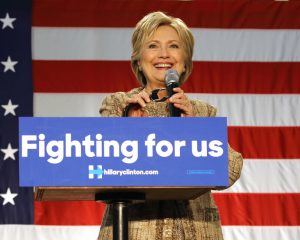 With their best competitors being an aging millionaire who wants to redistribute wealth (except much of his own), a Texan who eats tacos with a fork and has some frightening skeletons in his closet, and an array of assorted feminists who are floundering in the polls, the 2020 Democratic race is looking to be an absolute trainwreck.

Who better to step in and offer a few helpful hints than the queen bee herself, Mrs. Hillary Clinton? After all, she has plenty of firsthand experience with presidential campaigns, especially against Donald Trump, and on that basis she offered the nuts and flakes of this year’s Dem 2020 race a few hints.

But, the former First Lady and Secretary Of State ain’t gonna let a pesky little thing like her track record get in the way of giving her fellow Democrats “the talk”.

“You do have to present what you want to do—what is your vision?” Clinton said during an interview last week at the Women in the World Summit in New York. In other words, quit whining about Trump and making your platform solely about defeating him. He’s not a Bond villain, he’s the president.

If any readers are a fan of watching debates, and I mean real, scholarly debates (not the softball garbage we see each election year) you’ll be familiar with the concept that debaters must make “positive” statements about what they believe, not just negative statements to refute their opponents’ stance.

So, on that basis, Hillary ain’t too far off the reservation. At least until she opens her mouth again:

“At the same time, you must be able to counter and ignore where possible, respond where necessary, to the diversion and distraction that we see, unfortunately, working by the current incumbent in the White House.”

Oh, Hill. I’d hardly call the policies of your president a “diversion and distraction,” unless she means that all the energy Dems are spending obstructing and opposing Trump’s every move is distracting them from more important things, like banning plastic and stuff.

As for Hillary herself, her political aspirations seem to have gone dormant, praise the Lord (maybe speaking engagements and writing books offer a better return on investment than failed political campaigns).

While Clinton hasn’t yet officially endorsed any candidate, I have to wonder if any of the 2020 Dem hopefuls will take her advice, let alone consider it valuable. Wait and see, I suppose!