Hillary Clinton Calls 2018 a “Dark Time” for Our Country. For Her, Maybe… 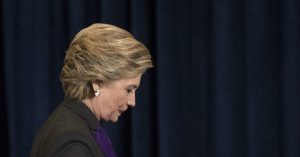 Hillary Clinton helped us all ring in the New Year on Instagram this week by looking back on 2018 as a “dark time” and reminding us all why she’s not in the White House.

It is, of course, likely due to the fact that she’s not in the White House that Hillary Clinton thinks 2018 was a dark time, because yet another year went by in which she would not be called “Madame President” every day.

2018 also was a very dark year for the progressive left, as Trump Derangement Syndrome runs rampant and they find new ways to tell us the sky is falling each and every day.

The former Secretary of State did, however, try to look on the bright side, and we’re not just talking about her throwback picture of her glorious 90’s bob.

As this “dark year” ends, Clinton wrote, “I’m grateful to everyone who brought light into it: activists who protected kids at the border, journalists who stood up for truth, organizers who mobilized voters for the 2018 elections, candidates who ran races with grit and inspiration, voters who made their voices heard, and absolutely everyone who marched, donated, called, and protested to fight for the values we share.”

It does seem clear she’s looking forward to a new year. After all, she has never actually denied that she’s considering a 2020 run, and one of her longtime aides recently said she hasn’t ruled it out entirely.

If she doesn’t run herself, she’s been busy raising lots of money for her PAC “Onward Together,” ensuring this power-hungry criminal maniac will be entrenched in American politics for as long as she still has breath in her lungs.

I’m feeling positive about 2019, as the possibility inches closer that she might actually be indicted for those pesky deleted emails, her campaign’s questionable activities in 2016, or at the very least selling out our country to the Russians and letting Americans die in Benghazi. Evidence of her incredibly corrupt political career keeps piling up, and here’s hoping something might finally become of it (thanks, Judicial Watch!)