Hillary Clinton and Stephen Colbert Revel In Impeachment Proceedings: “Lock Him Up” 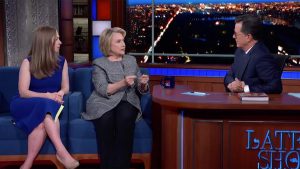 Go ahead and pop an aspirin for this one now, you’re gonna want it.

In Monday’s episode of his late-night show, left-wing comedian Stephen Colbert reveled in the upcoming impeachment proceedings and lobbed shot after shot at President Trump alongside his guests, Hillary and Chelsea Clinton.

Among the series of loaded one-liners Colbert aimed at Trump Monday was a reversal of a chant often heard at 2016 Trump rallies and the suggestion to Chelsea that she might want to “slap [Trump’s] mouth.”  Hillary — who quite literally was laughing from the second she stepped onto the stage — offered several more appreciative laughs in response to the host’s efforts to bring to life the “alternate timeline” starring President Hillary.

“These are big fans of the alternate timeline we’re not living in,” said Colbert in reference to the wildly cheering audience that greeted the Clintons. The comment prompted one of Clinton’s many forceful laughs.

“I want to talk about your new book, ‘The Book of Gutsy Women’…” said Colbert, before adding, “and we’re going to do that in just a minute, I promise you,” evoking a belly laugh from the elder Clinton. “Your fault for coming on Ukraine week.”

“We learned about the Trump-Ukraine call, the private server,” said Colbert. “Is it time to, dare I say, ‘Lock Him Up?’”

At this point, Colbert’s audience “Lock Him Up! Lock Him Up!” which, once more, sent Clinton into fits of laughter.

“What do you make of it?” Colbert asked Clinton.

“So, here we are, and we have started an impeachment inquiry, which will look at the evidence, and I think that’s exactly what should be done,” Clinton said. “I believe strongly that this particular incident has had such a huge impact because we’ve known for a long time that he was a corrupt businessman who cheated people, and we’ve known that he and his campaign asked for aid from Russia. We’ve known that. But to see him in the Office of the President, putting his own personal and political interests ahead of the national security of our country, just pierced through whatever confusion or denial people had. And at that point, Speaker Pelosi rightly said this is something we have to investigate. And that’s what’s going on.”

After more approving applause from his audience, Colbert insisted that he was never a big “impeach him fan,” but “when someone is clearly using the office that they’re in to subvert the ballot box, to use by corrupt means, influence from other countries to maintain their office, what good is the ballot box at that point in time?”

Of course, neither Colbert nor Clinton, whose campaign infamously paid for the still unverified dossier based on foreign sources that sparked the debunked “Trump-Russia collusion” conspiracy theory, addressed the alleged scandal behind Trump’s request of Ukraine President Volodymyr Zelensky to “look into” Joe Biden, who himself pressured the Ukrainian government to remove the top prosecutor investigating the Ukrainian company that hired Hunter Biden weeks after his father was appointed to head up Ukraine-U.S. relations.

Neither did the troupe of cackling ghouls even once reference former president Bill Clinton’s famous impeachment for perjury, and they sure as all hell didn’t touch on the State Department’s intensified investigation into Hillary’s use of an unauthorized, unsecured server when she was Secretary of State.

Instead, Colbert set Clinton up with a few easy shots at a big target. “How many times when you were secretary of state did you have to say to Obama, ‘You can’t extort foreign countries to get dirt on your political enemies?’” asked Colbert.

“Yeah, that never happened,” Clinton responded with a grin.

Colbert also tagged Chelsea in the conversation a couple of times by describing her mother as the object of Trump’s “obsession” and suggesting that she might want to “slap his mouth when he says her name.”

If you can stomach it, watch the segment in the video below: