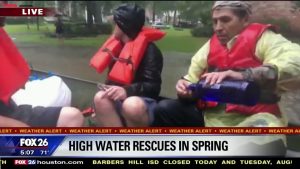 This is hysterical! A local anchor’s reaction and comments while watching guys take shots is epic. She’s clueless that the guys are doing shots after being rescued from the flood. Nice try though.

This is yet another reason why Texans are great.  Nothing is going to get in the way of a good shot of liquor.

Did you catch the irony in the reporter’s comments…Funny!

A cameraman at a local Fox station in Houston caught a group of civilians apparently taking shots of liquor as they were rescued during the emergency response to Hurricane Harvey.

KRIV reported live Monday night about a group of men being ferried to safety in the suburbs of Spring, Texas. One of the men produced a blue bottle and a shot glass, passing it around the lifeboat to share for others to take shots as well.

“That was really an example of what we’re seeing here,” a female anchor narrated. “Look at them sharing water, just out the cap of the bottle. That is fantastic.”

“Yeah, I’m not sure that was water,” her male co-anchor corrected.

“Well, whatever they need to feel better, guys,” she said as he laughed. “Let’s just let that one go. Let them have a little—have what they need.

Eventually, the same man did produce a large bottle of water and took a drink.

“There’s the water! I told you they had water,” the anchor said triumphantly.
Via 100 Percent Fed Up