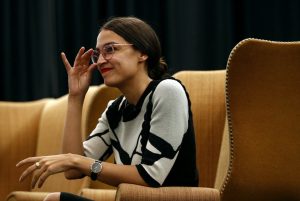 I’m sorry if you’re getting sick of hearing about Alexandria Ocasio-Cortez.

The lady is hilarious, and her inability to recall facts or comprehend simple math just underscores how ridiculous her political platform is.

Plus, she knows next-to-nothing about how our federal government actually works, which does make sense as it requires a profound lack of understanding as to how the government works to actually think socialism is a good idea.

Her Twitter feed is a pretty good indication that she actually doesn’t care whether or not she’s making strong arguments as long as she can call someone else a hater.

You’ve got to hand it to her, she’s nailed down a foolproof (maybe that’s not the right word) method for Tweeting in a manner that makes her impervious to having to answer for any of her foolishness (so maybe “foolproof” was the right word.)

First up, appearance is everything:

Step 1: Always include a picture of yourself wearing nerd glasses. pic.twitter.com/k4R5FURQuY

Second: appeal to authority is absolutely not a logical fallacy, but rather makes you always right about everything ever.

Step 3: Compose an easily understandable but false comparison, for maximum outrage. "If GM can build a car, why doesn't the flu vaccine cure the common cold???" pic.twitter.com/Qd3SydxA3W

Third, whatever you say doesn’t have to make sense, it just has to sound like it would look good on a bumper sticker.

And never forget to appeal to confirmation bias:

Step 4: Be sure to include a comprehensive study from a noted publication, like Mother Jones, the Working Families Party Monthly, or the Weekly World News.

Note: Ensure the study includes the word, "TRILLIONS" a bunch of times. pic.twitter.com/wq9ZxRGfBV

Now, step four is key, because all your incoherent, non-sensical statements are sure to attract the attention of haters.

Note: At this point, right-wing, reactionary nazis who hate puppies will start to attack you with silly things like "facts", and "math." Be not afraid, move on to step 5. pic.twitter.com/Smt7rPOZQN

And this is where the magic happens:

"Oh, I see the fascist, Republican racists are terrified of a totally gorgeous woman like me who knows everything and is always right and is like totally in charge of all three chambers of government now!" pic.twitter.com/AVVgLww7Tm