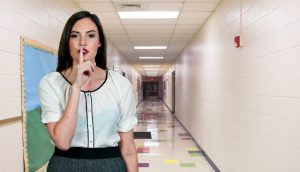 A principal and assistant principal at a high school in North Carolina have been suspended with pay after an investigation uncovered that one of the school’s students was suspended after she reported being a victim of a sexual assault.

Not long after the suspension of Hawthorne Academy High School Principal Diann Weston and assistant principal Nina Adams was announced, the mother of the teenage girl who got booted for reporting the assault went on to say, “My daughter wants everyone to know that she thanks them and it makes her feel she has more support. … We never expected to get as much publicity as we did but we want everyone to know that things like this should be heard and not hidden.”

Last week, WBTV reported that the girl, who is a sophomore at Hawthorne Academy High School, was suspended in late October after filing a report claiming she had been sexually assaulted by a classmate in August. WBTV reported on November 2:

She made the report in late August, after sitting through a Title IX class at the start of the school year. The case was referred to Charlotte-Mecklenburg Police, who investigated. A CMPD spokesman confirmed that a juvenile was charged with sexual battery as a result of the report. But school administrators determined, independently of the police investigation, that the report was unfounded. … As a result, they suspended the female student who reported being sexually assaulted, made her sign a no-contact order, which she says has prevented her from participating in some school activities, and she is being made to attend a CMS class called Sexual Harassment is Preventable.

“I really just thought I had faith in CMS, that they were going to do right by my daughter,” the girl’s mother went on to say during an interview with WBTV. “So when I got that phone call I was hurt. … They are making her feel like she is being punished for coming forward,”

Laura Dunn, the attorney who is representing the student, said, “CMS had plenty of opportunities to avoid yet another campus sexual assault scandal, but rather than taking meaningful action when issues arose at Myers Park High School, it has waited for another disaster to strike at Hawthorne Academy. … All parents need to stand with their students at this time and demand change so this does not happen to another student ever again.”

On Monday, a second Hawthorne Academy student revealed that after she reported a sexual assault in 2019, she was urged to sign a nondisclosure agreement. Rashika Chamlagai claimed the NDA included ten bullet points, including one that stated she would not speak about the alleged sexual assault until she graduated. She asserted, “I signed the NDA because I was overwhelmed and I felt pressure because I didn’t know what was going to happen if I didn’t.”

School Superintendent Earnest Winston released a statement last week that said, “As a parent, I understand the concerns many families are sharing about news coverage of incidents of misconduct. It is difficult for me to not give in to the parental instinct of providing information to help others gain a better understanding of situations, which many times prove more complex than news reports might lead one to conclude. As the leader of the district, I am bound by law to not disclose confidential information about such matters as individual student discipline or ongoing police investigations.”

So much for all that “war on women” narrative that the left used to push so hard, right? Or, more recently, the #MeToo movement, that was supposed to be about “believing all women” and all of that stuff when it came to reports of sexual assault.

The bottom line is, the left never practices what it preaches, proving time and time again, they are some of the worst hypocrites in the country.