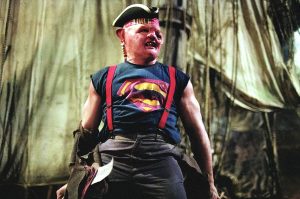 Okay, if you didn’t understand that reference (or the photo that accompanies this gem of an article) you need to make it your mission to watch The Goonies today. But not until you’ve read this and developed a new appreciation for that humble little word in the Western lexicon: guys.

Why does “guys” matter? Well, it really didn’t, honestly, until wild-eyed leftist media company NowThis told us we should stop saying it.

You know what’s a good way to get people like me to do something a hell of a lot more often than we already do? Have a liberal tell me to stop doing it.

In an entirely serious and not satirical video published earlier in the week, NowThis’ producer Foluké Tuakli offers the watching world a kind lecture on the corrosive effects “guys” has on society and, despite bookending her presentation with the phrase, asks us to pretty please try super duper hard not to use the triggering phrase if you can or not or whatever.

‘Hey guys’ seems innocuous, but here’s why you might want to try a different greeting pic.twitter.com/3Ep4Nmjf3d

Hey guys, welcome back to NowThis! ‘Guys’ is a simple term. it could mean boys, or if you’re modern, hip, it means people.

At first glance, ‘guys’ seems inviting, friendly, maybe warm, even comedic at times. but, it like many male default terms should not be normalized as an all-encompassing phrase—innocent as it may seem.

While we may understand the word means no real harm, with a deeper look, you’ll understand that we’ve been ignoring the cognitive impact on women, as well as gender-nonconforming folks by only explicitly addressing the male-identifying individuals present.

Now, stop right here, guys. Does this mean that I, as a woman, can identify as a male and cash in on all that sweet, sweet affirmation when my 7-year-old bursts into the room and prefaces his latest backyard discovery with an excited “hey, guys”?

Does this mean when Chad Prather identifies as Beverly Wall (or Tad Paphaphapholous, for that matter) s/he has to use an even more gender-neutral phrase when s/he shares his/her story with other brave humans? I’m so lost.

What if I wanted to address a group of what appears to be all male-identifying dudes. You know, muscle shirts, backward visor caps, Bud Light in a novelty printed foam sleeve. Is it acceptable for me to assume their gender so that I may affirm and empower them with a hearty, “hey, guys!” before tossing a milkshake at them? Is that cool?

The video continues with a fun little history lesson citing the Washington Post in a claim that the term most likely comes from the name of Guy Fawkes, the immortal British revolutionary before eventually coming to be a term for “creepy” people and then, finally, becoming the handy little word we know and love today and use for groups of men, mixed groups of men and women, cute things (as in, “aww, look at those little guys!”), or pretty much anything. I have literally referred to paperclips as “guys” once. It’s a perfectly acceptable word with no sinister undertones. Or so we thought, anyway.

“For decades, we have set a standard of only addressing the men in the room. Of course, we claim it’s colloquial, but with our elevated knowledge and inclusive perspective, it just seems lazy, inconsiderate, and a small part of what reinforces the gender hierarchy today,” Tuakli continues. “Can we be surprised that for decades, women felt uncomfortable asserting their voice when we didn’t even take the time to properly acknowledge them?”

Amen! As a woman, I totally feel marginalized and oppressed unless my gender is affirmed and celebrated every single time someone comes into the room. So glad someone is finally speaking up about this danger to society. So brave. So, so brave.

While Tuakli concedes that there are certainly more pressing issues in society today, such as “reproductive rights, rape culture, violence against women, LGBTQ rights, and the general reprogramming of most people’s minds,” she still stands kinda-sorta firm-ish that we need to maybe stop microaggressing with this totally not gender-neutral phrase because “when you stop valuing the personhood and visibility of individuals, you make it easier to dehumanize them on a macro scale, minimizing his, her, its, their right to respect and equality.”

I simply have no words for this. Well, not any words I can publish with a clear conscience, anyway.

“I’m sure there’s no malintent,” Tualki continues. “I just want you to know that this is one small step away from making a more conscious effort to dismantle the patriarchy.”

“Don’t believe me?” she adds, tempting the viewer to “try walking into a room full of cisgender, heterosexual men and triumphantly announce, ‘Hey gals,’ ‘Okay, girls,’ ‘Thanks, Sis!’ I’m sure within ten minutes, if not seconds, at least one person will correct you.”

Yup, because if I go into a room full of men (after assuming all their gender identities and sexual orientations, of course) and refer to them with a term that is not culturally accepted as being appropriate to use for both men and mixed groups, they’re probably gonna be confused. In fact, I think they’d probably shrug it off and assume I just learned the language or had a head injury before bothering to correct me. Guys are easygoing like that.

“You can say that all of this is silly or too PC but there are always larger societal implications of language — the way we use it and weaponize it,” Tuakli concludes. “Face it: the way we do and say things matter. So if you do nothing else, repeat after me: I am powerful.”

Right before saying, “Hey guys, thanks for watching! Be sure to subscribe to NowThis,” of course.