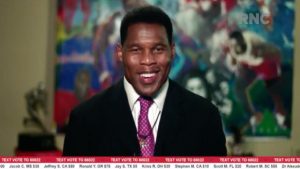 Legendary college football star Herschel Walker is apparently going to be be running for U.S. Senate in the state of Georgia, having filed his paperwork to have a campaign on Tuesday of this week, according to reports from the Atlanta Journal-Constitution.

An official announcement from Walker is expected in the next few days.

Walker, a friend of former President Donald Trump who has no experience in public office, will face off next year against incumbent Democratic Sen. Raphael Warnock in what is expected to be among the most competitive Senate races in the United States.

Warnock defeated Republican Sen. Kelly Loeffler in a special runoff election on Jan. 5 to finish out the term of former Sen. Johnny Isakson, who retired in 2019 for health reasons.

Walker delivered a speech during the Republican National Convention last year in support of former President Donald Trump’s candidacy, going on to defend him from charges of racism and then reflecting on the relationship they have by drawing comparisons between the way Trump approaches public life and his own playing style on the field.

“Some people don’t like his style, the way he knocks down obstacles that get in the way of his goals,” Walker stated in his speech. “People on the opposing team didn’t like when I ran over them either, but that’s how you get the job done. I pray every night that God gives him more time. Give him four more years.”

The former president later said that Walker would be “very, very hard to beat,” if he ran for office.

“They love him in Georgia. I’ll tell you. He was the greatest running back in the history of the state … He is a fantastic guy, and they love him,” Trump went on to say of Walker.

Let’s hope he can truly take it to Warnock, because the last thing we need in the Senate is more crazy Marxist. With Biden’s Afghanistan debacle, we should see a lot of victories coming soon.