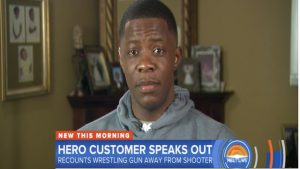 With the shape our current culture is in, we need all of the good natured, self-sacrificial heroes we can get.

Thankfully, James Shaw Jr. decided to answer the call and in the process saved a bunch of lives.

Shaw recently appeared on “Today” where he recounted how he was able to leap into action and disarm an armed lunatic on a shooting spree at a Waffle House in Nashville, Tennessee over the weekend.

A 29-year-old man — who, by the way, had his gun authorization revoked and weapons confiscated by authorities in Illinois last year after appearing in a restricted area of the White House — entered the Waffle House and opened fire with a semi-automatic rifle.

Now, before we continue on here, it feels like a good time to clarify that a semi-automatic rifle is not the same thing as a machine gun. A machine gun is fully automatic. It’s sad this needs to be clarified, but the left continually attempts to redefine words, so unfortunately, this step has become necessary.

Anyway, with a semi-automatic, you have to squeeze the trigger to fire each individual round.

Four people were killed and several others injured during the incident. However, while that is certainly tragic, things could’ve been a lot worse if not for the actions of Shaw, especially since the armed man had more magazines prepared.

“When I first heard the gunshots, immediately it was like a ‘What’s going on?’ feeling,” Shaw said during his interview on “Today.”

“And then I looked aback and I saw a gentleman at the door of the Waffle House. I kind of jumped from the high countertop seats…toward the bathrooms.”

The man dropped the barrel of the gun down, which was the opportunity Shaw had been waiting for and he did not hesitate to take it.

“When I saw the barrel down, I saw my opportunity and I attacked. I took it, and it worked out for myself and others that were actually in the Waffle House at the same time.”

Shaw was later asked how he managed to wrestle the man’s gun away from him, to which he replied by stating he used the front door of the establishment to help him.

“When I ran through the swivel door, the swivel door acted like another … hit, another layer, and it pushed the gun down, so the barrel of the gun actually bumped down and it was aimed towards the ground. Once it was aimed towards the ground, I held the gun down I think with my left hand, and I was either punching or hitting or whatever I was doing with my right hand. And then once he released it — at one point in time he had it in one hand. When he had it in one hand, I just took it from him with both my hands and then I threw it over the countertop.”

“I was still trying to get out,” he continued, “so I took him and myself out of the Waffle House, because I knew my best chance of surviving was outside. Mind you, he was … nude and he just had a jacket on, so I didn’t know if he had another weapon on him, like a knife, he might have had a hand gun. But I knew if I could get outside that I would be all right.”

As if this man could not get any classier, when asked how he was doing, Shaw said he did not want the focus to be on him, despite being grazed by a bullet.

“I’m all right, just a little bit sore, but I’d rather be sore than severely shot,” he stated. “This morning I got up thinking about the four people that had passed and the other victims at Waffle House, and I’m hoping that … people are just as concerned about them as they are about me.”

Shaw deserves credit for being a hero because there is little doubt more people would be dead today if this man hadn’t risked life and limb to do the right thing and protect others.