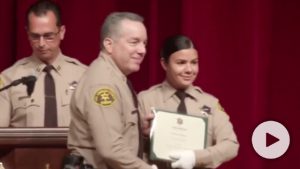 One of the sheriff’s deputies who was injured during a shooting in Compton over the weekend has now been identified, and as it turns out, the woman was a librarian before she decided on a change of career by joining up with the Los Angeles Sheriff’s Department nearly three years ago.

Claudia Apolinar, who is currently recovering from her wounds in the hospital, being guarded by her fellow deputies, started working as an aide at the local library back in 2011. She left that position to start a career in law enforcement in 2017.

Apolinar is 31-years-old and has a 6-year-old son. Her and her partner, 24, were both ambushed in their car Saturday night at a metro center in the city of Compton. Both were rushed to the hospital in serious condition.

The woman’s father spoke with the media saying his daughter was currently under the protection of a member of the LASD who were standing watch over her room.

Apolinar was struck by bullets from the gunman in her face and torso, but being brave and bold, she tended to her partner’s wounds after they were able to climb from the police vehicle.

“It’s an extreme situation. She was shot in the face, shot in the upper torso several times,” LASD Lt. Brandon Dean told the Mail. “To have the wherewithal to get yourself out of the vehicle and the line of fire in case it continues, but then to take care of your partner, initiate radio traffic make sure the civilians in the area are safe, it shows a lot about her courage and intestinal fortitude.”

In dispatch audio from the moments following the shooting, a weak-sounding voice can be heard saying: “998 Compton Pax,” which is the code to signify a deputy-involved shooting, according to the Mail. When the dispatcher asks if it just happened, the barely-there voice reportedly responds: “Compton Pax, deputies down. Compton Pax 998.”

NEW: LASD & the families of the two ambushed deputies have given me permission to show this graphic photo of the moment after they were shot. I’m told female deputy was shot through jaw, still radioed for help & applied tourniquet to male deputy’s wounds. Both stable now. @FOXLA pic.twitter.com/6m06qec1v2

The Los Angeles Sheriff’s Department announced recently that they would be offering a $100,000 reward for information that could lead to the arrest of the suspect involved in this heinous shooting.