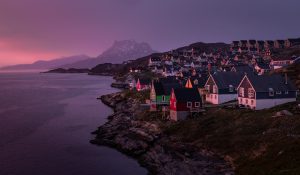 While reports of President Trump looking to purchase Greenland (the big one that is not very green, for my geographically-challenged readers) aren’t as exciting and reminiscent of The Jerk as they first sounded, the prospect may be a promising one.

No, not just because Americans could use their Real ID to hitch a ride up to Ittoqqortoormiit (yes, that is a real city) to buy a pet narwhal, or because a massive frozen wasteland would make a great penal colony or a place to cryo-freeze a supersoldier.

No, all these benefits are just the tip of the many icebergs that come with the territory.

In a Sunday interview with Fox News guest host Dana Perino, Larry Kudlow, Trump’s top economic adviser, confirmed that the purchase of the world’s largest island is currently under consideration.

Kudlow explained that Trump’s interest in Greenland stems from its high strategic value in terms of national security and economic interests.

“Denmark owns Greenland. Denmark is an ally. Greenland is a strategic place up there and they’ve got a lot of valuable minerals,” Kudlow explained. “I don’t want to predict it now. I’m just saying the president, who knows a thing or two about buying real estate, wants to take a look at a potential Greenland purchase.”

Ultimately, details at this point are minimal, and Kudlow wasn’t about to tip his hand: “Look, it’s an interesting story. It’s developing. We’re looking at it. We don’t know.”

At this point, Greenland foreign minister Ane Lone Bagger has tersely responded to the news, saying, “We are open for business, but we’re not for sale.”

Yeah, sure, buddy. You wait ’til The Don works some’a that Apprentice magic on you, then we’ll see.

While the idea of our combed-over commander-in-chief buying a giant island may seem funny to some folks (if you’re like me and your imagination is basically one giant Sunday comics page), it’s actually serious business that could offer huge benefits to the nation.

From the Washington Examiner:

Greenland also abounds with resources. An already energy independent U.S. would have unfettered access to a land rich not only in hydrocarbons but also in rare earth metals that are currently only available from an adversary, China. Greenland also controls flourishing fishing waters.

But this isn’t just about American interests. Greenland’s small population also has everything to gain from a massive influx of American investment. The surge in tourism alone would surely offer a vast untapped potential.

While it’s more than likely that, if a deal were made, Greenland would become a U.S. territory and not be annexed as a state, we don’t need to look back too far in our history to see how beneficial purchase of near-arctic land has been for this country, namely our purchase of Alaska from Russia for $7.2 million.

But, then, with a national debt of $22,519,286,700,000 and counting, one might want to take a very shrewd approach to analyzing the risks and benefits of buying an island. Just a thought.