Here’s Why Colt Is Halting Production Of Civilian Rifles, Including The AR-15 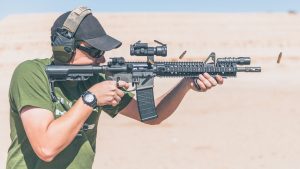 As federal gun-grabbing becomes an increasingly hot topic among the looney tunes who aspire to the presidency in 2020, it’s more than a little concerning when a big name firearms manufacturer up and decides to pull the plug on making civilian rifles.

While Colt claims that its plans to suspend production of rifles, including AR-15s, has nothing to do with the political writing on the wall, it’s certainly fair to question that story.

In an official statement for by the Connecticut company on Thursday, president and CEO Dennis Veilleux said that Colt announced the temporary suspension but assured customers that the company remains “committed to the Second Amendment.” Rather than any ominous clouds seen brooding over the Democratic Party, Veilleux instead says the decision is due to the sporting rifles market reaching a “significant excess manufacturing capacity.”

“There have been numerous articles recently published about Colt’s participation in the commercial rifle market,” the statement reads. “Some of these articles have incorrectly stated or implied that Colt is not committed to the consumer market. We want to assure you that Colt is committed to the Second Amendment, highly values its customers and continues to manufacture the world’s finest quality firearms for the consumer market.”

“On the other hand, our warfighters and law enforcement personnel continue to demand Colt rifles and we are fortunate enough to have been awarded significant military and law enforcement contracts,” the statement continues. “Currently, these high-volume contracts are absorbing all of Colt’s manufacturing capacity for rifles. Colt’s commitment to the consumer markets, however, is unwavering. We continue to expand our network of dealers across the country and to supply them with expanding lines of the finest quality 1911s and revolvers.”

“At the end of the day, we believe it is good sense to follow consumer demand and to adjust as market dynamics change,” Veilleux concludes. “Colt has been a stout supporter of the Second Amendment for over 180 years, remains so, and will continue to provide its customers with the finest quality firearms in the world.”

Here’s hoping this is due purely to market saturation and not the fact that the “Hell Yes” crowd is itching to take away our boomsticks.

In fact, given that military and law enforcement would be the boots on the ground tasked with carrying out a weapons confiscation plan, it’s still rather unsettling news. Keep your eyes peeled.