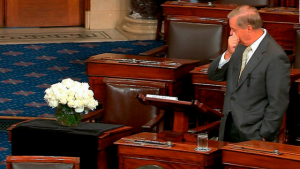 While the media attempts to stoke the flames of drama for as long as they can following the passing of Senator John McCain over the weekend, the majority of the Washington establishment has been able to set aside differences momentarily to honor a man who was undeniably a great patriot and dedicated public servant.

Trump, who immediately tweeted out some very kind words following news of McCain’s passing, briefly did attract the eager ire of the media for raising the flags back up to full mass before McCain was buried, going against tradition that the flags remain at half-mast until the Senator is laid to rest.

The media can’t take their focus off the clash between Trump and McCain over the last few years, and, by the sound of it, you would have nearly thought Trump was almost personally responsible for the late Senator’s death.

But behind closed doors, it appears he is being quite respectful of those who served by McCain’s side who are mourning the loss of a great friend if a recent conversation he had with Lindsey Graham is any indication.

Sen. Lindsey Graham, R-S.C., revealed President Trump called him after he gave an emotional tribute to the late Sen. John McCain on the Senate floor Tuesday.

“He called yesterday after my speech and he couldn’t have been nicer,” Graham told CNN on Wednesday. “He said, ‘That was very sad. I just wanted to let you know that you did right by your friend.’ I said, ‘Thank you, Mr. President.’”

He added that he regretted the tension between the two men:

“John is my dearest friend in the world and I’m going to try to help President Trump … When he says something bad about John, it pisses me off,” Graham said.

Graham said he doesn’t agree with people who tell him he can’t honor McCain if he isn’t fighting Trump.

Before McCain died of brain cancer Saturday, Graham said the Arizona senator told him to help Trump where he can, but leave “all the drama and the BS” behind.

That sounds like fair advice to anyone working with Trump. While POTUS seems to attract drama wherever he goes, at the end of the day, he seems like a simple man who’s willing to leave the BS behind with anyone who extends a hand of friendship and agrees to work together.