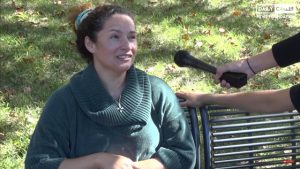 Is it just me, or does it seem like Democrats live in a constant state of fear about this, that, or the other thing? Right now there big boogeyman is the coronavirus. How many Democrats inside and outside of the government have you witnessed panicking like crazy over this illness, which has a 99 percent survival rate, demanding we shutdown all of society, wear masks, and never leave the house?

Well, as election day approaches, it seems these notorious gloom and doomers are at it again, only this time it’s not just the coronavirus they’re scared out of their minds that Armageddon is going to strike if President Trump gets reelected.

The Daily Caller recently took to the streets of our nation’s capital where they asked people what they thought would happen if Trump won the election.

Many local businesses have already boarded up their store entrances in order to prepare for the potential of civil unrest.

This is probably a wise measure to take given how prone folks have been this year to rioting and looting when something happens they don’t like.

One woman who was interviewed by the Daily Caller said she was “gonna move back home to London,” while another stated she would “celebrate” if the president wins.

“He is absolutely the most unique and formidable genius, stable genius, that has come across this statesmanship forum in a long time,” the second woman told the DCNF.

Another woman criticized Trump and said “it’s going to be a miserable experience” and that she’s “gonna cry” if Trump wins.

When asked, “Do you think the city is gonna be crazy?” the woman replied, “I do and I think it’s being boarded up because he loves turmoil, he loves, he’s he’s a bully. He wants to rally his crowd to become destructive. He thrives on that.”

“What do you think the city is going to look like?” The Daily Caller asked the woman.

A man interviewed said he doesn’t really care what happens.

“Probably the same thing I did the last four years, not really care and just live my life, cuz they don’t really care about any of us on both sides,” he responded.

Another individual said a Trump win wouldn’t really impact his life all that much.

“I think, the the president affects a lot of things, but on a daily life it’s more about the local elections that that we can win and have people in our community that we know. You know, raise, you know, up laws and decisions that will affect us on a daily level,” he said.

This last answer is probably one of the best I’ve ever seen when it comes to discussing the national election. It’s important, yes. Very much so. But local elections directly impact your every day life, yet no one seems to be raising as much of a stink about that or demanding folks pay more attention to what is happening in their communities.

If you really want to make an impact, focus on your city, county, and state politics. That’s where you can really change things. Be active in national politics for sure, but don’t neglect your own backyard.