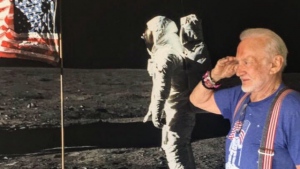 Buzz Aldrin, the second man to walk on the moon, once punched a moon-landing denier right in the kisser.

True story. Check it out:

So you can imagine what now-88-year-old Aldrin thought when he caught wind that the Canadian Ryan Gosling was bragging about how they left the American flag out of a movie on Neil Armstrong’s moon landing.

The omission, which couldn’t be more irritatingly quintessential of 2018 Hollywood, is also a seriously dumb failure considering the planting of the American flag on the moon is one of the most iconic and well-known images of not only the moon landing itself and Armstrong’s career, but the entire 20th Century.

Apparently, Aldrin essentially feels the same way, and, despite being 88, knew just the way to voice his outrage in the 21st Century:

Yes, Aldrin has a Twitter account, and yes, he used it to blast Hollywood for leaving out this vital aspect of the first moon landing.

Then came this epic photo, from another Twitter user:

The ultimate Selfie-Selfie…thank you for sharing the wonderful photo and your incredible journey @TheRealBuzz. #Moonwalker #Apollo11 #RoadToApollo50 #NASA pic.twitter.com/ZwAVgWZSJO

I double-dare Ryan Gosling to top that.