Here’s How The Loving, Inclusive Left Is Reacting To Rush Limbaugh’s Cancer Announcement 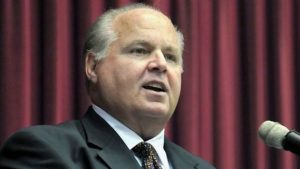 Conservative radio legend Rush Limbaugh announced earlier this week that he has advanced lung cancer and will miss several days of his iconic talk show to undergo treatment.

“This day has been one of the most difficult days in recent memory, for me, because I’ve known this moment was coming,” Limbaugh said in an announcement during the show.

“I’m sure that you all know by now that I really don’t like talking about myself, and I don’t like making things about me. … One thing that I know that has happened over the 31-plus years of this program is that there has been an incredible bond that had developed between all of you and me.

“So, I have to tell you something today that I wish I didn’t have to tell you. It’s a struggle for me, because I had to inform my staff earlier today,” Limbaugh continued. “I can’t help but feel that I’m letting everybody down with this. But the upshot is that I have been diagnosed with advanced lung cancer.”

“Every day I’m not here, I’ll be missing you and thinking about you,” Limbaugh said as he concluded the show. “I thought about not telling anybody… It is what it is. You know me; I’m the mayor of Realville.”

“So this has happened, and my intention is to come here every day I can and to do this program as normally and as competently and as expertly as I do each and every day, because that is the source of my greatest satisfaction professionally, personally,” he continued.

“I told the staff today that I have a deeply personal relationship with God that I do not proselytize about. But I do, and I have been working that relationship tremendously, which I do regularly anyway, but I’ve been focused on it intensely for the past couple of weeks,” Limbaugh said, noting that he is currently “experiencing zero symptoms.”

Limbaugh’s producer, Bo Snerdley, confirmed the announcement in a tweet:

Those of you who are listening to the Rush Limbaugh show now. Pray with us. Thank you. God Bless you Rush Limbaugh. Love you so much Rush.

Although Snerdley’s tweet was met with an avalanche of condolences and kind words toward Limbaugh and his loved ones, the ugly side of Twitter predictably came out as stacks of leftists (blue-checked and otherwise) celebrated the announcement.

You know, because that’s the loving, tolerant thing to do.

Here are a few of the worst:

I mean, apart from the grace of God keeping you from being hit by a Guinness truck, this applies to all of us, Mr. Tyson.

Man…i can’t believe I’m excited about this who have we become ?

If terrible means great news. Sure. Fitting end to an evil man.

What a fun obituary.

Have hated Rush Limbaugh’s views on almost everything for decades. However, I do not wish cancer on anyone or the suffering it brings. Rush, I sincerely hope you beat it and pull through, you evil prick.

Was that an imprecatory psalm or something?

I mean, The Joker is a bloodthirsty sociopath, so I suppose that was a good choice of GIF.

I mean it, he got away with the murder of my grandfather (his own brother) and did some pretty horrible things to my father and uncles…. I had nothing but joy in hearing about his end.

So, an unsavory conservative commentator is on the same level with an abusive murderer? Duly noted.

Other prominent liberals, however, were eager to show their comrades how to act like a decent human being, like ex-Republican author Rick Wilson:

I just heard the news that Rush Limbaugh has advanced lung cancer.

I’m going to show you how this should be done:

I wish Rush a speedy and complete recovery from his cancer.

Human being pro-tip: don’t wish cancer on *anyone*…even on your adversaries.

Democratic presidential candidate Tusli Gabbard also extended her condolences to Limbaugh, which earned her the relentless mocking of her liberal followers:

To Rush Limbaugh: I and my family send our love and best wishes to you and your loved ones at this difficult moment in your life. May your hearts and minds be filled with and strengthened by God's love.

Listen to Rush’s full announcement here, and pray for his speedy recovery:

Here's the audio of Rush Limbaugh announcing on his show that he has lung cancer. pic.twitter.com/V60pAOpf68