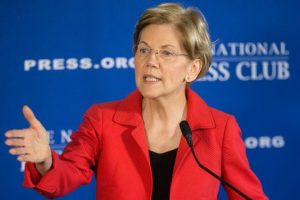 Elizabeth Warren, to absolutely no one’s surprise, has announced she is seriously considering a 2020 run, promising a likely repeat (in every way) of 2016.

“After November 6, I will take a hard look at running for president,” she recently told an ecstatic crowd at a town hall event in Holyoke, Mass., according to The Hill.

As the Democrats appear to be in the midst of a serious identity crisis leading up to 2020, Warren’s announcement stands as, well, the best chance they have, which doesn’t say much.

More from The Hill:

The comments are among the firmest of any prospective Democratic presidential hopeful that they could seek the party’s nomination.

The only other Democrat to announce a firmer stance on running for president is Rep. John Delaney (D-Md.), who already formally announced his campaign.

Should Warren run for president, it is expected that she would enter a crowded Democratic primary and could face fellow Sens. Cory Booker (D-N.J.), Kamala Harris (D-Calif.), Kirsten Gillibrand (D-N.Y.) and Bernie Sanders (I-Vt.).