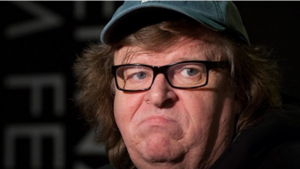 Michael More has just released a new anti-Trump documentary, and, as is predictable for the famously progressive documentarian, it’s an orchestrated smear campaign with a bold political agenda.

Can you say “low-hanging fruit”?

Naturally, just as predictable as Moore’s chosen angle for a documentary on the Trump administration, the mainstream media is starry-eyed and in love with the film. It’s received gushing, glowing reviews from all the usual suspects, as well as a 86% “fresh” rating on Rotten Tomatoes.

There were, however, 13 outlets that deemed it “rotten”, and the Daily Wire shares what those who dared to go against the grain had to say about the film, “Fahrenheit 11/9”.

Here are some of the most scathing reviews…from liberals.

“A disjointed, occasionally powerful, often grating grab bag of recent political events, a mess that’s forgivable only because it does reflect the messy state of the world.”

“Moore’s disdain for President Trump is mostly contained to lazy shots about his (undeniably creepy) affection for his daughter Ivanka; he’s perhaps assuming that his audience will not need much convincing on Trump’s leadership deficiencies.”

“Fahrenheit 11/9 represents a sincerely bold attempt to capture the overwhelming civic decay that led to our current political crisis, but Michel Moore’s circus-showman duplicity is as crass and abhorrently self-promoting as that of Donald Trump.”

“Fahrenheit 11/9 is funny and mischievous in parts, but too little of it feels fresh or shocking.”

“Not his best effort … it’s like Moore’s even forgotten why he got into this business in the first place.”

“The unfocused Fahrenheit 11/9 mostly tells us that things are bad and could get worse, which seems unnecessary at this point.”

“A short review of Moore’s film could consist of three words: We knew that. … If Moore really wanted to explain how Trump became president, he might have spent some screen time talking with Trump supporters. Instead, ‘Fahrenheit 11/9’ just feels like comfort food for the Resistance.”

Ouch! It sounds like Michael Moore has found himself in a world so full of progressive hysterics, his work has suddenly become beating a dead horse, even to those who would otherwise agree with his politics.