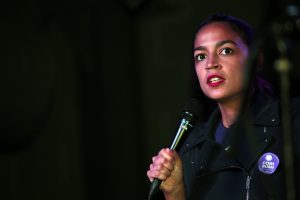 Alright, folks. I know they can look very, very similar, but ignorance and dishonesty are not the same thing.

When it comes to Alexandria Ocasio-Cortez, I’m having a hard time figuring out exactly which of those two is at play. Let’s face it, after a certain point has been crossed, I think it’s safe to say that pleading ignorance is off the table.

Claiming that the United States is running literal “concentration camps” at its southern border may very well be that point.

…on Monday night Ocasio-Cortez said during a live Instagram video, “The United States is running concentration camps on our southern border and that is exactly what they are. They are concentration camps. And, um, if that doesn’t bother you, I don’t, I don’t know, I like, we can have, okay whatever.” She also alluded to the Holocaust by adding the words “Never Again,” blathering, “I want to talk to the people that are concerned enough with humanity to say that we should not that ‘Never Again’ means something and that the fact that concentration camps are now an institutionalized practice in the home of the free is extraordinarily disturbing and we need to do something about it.”

Now, to be completely and totally fair, the United States doesn’t have a spotless track record when it comes to rounding up its own citizens and throwing them in camps, as our government did to Japanese-Americans during World War II.

And, as AOC and her apologists have been quick to note, there is a stark difference between Nazi concentration camps and Nazi death camps, one too gruesome to address in this article.

This administration has established concentration camps on the southern border of the United States for immigrants, where they are being brutalized with dehumanizing conditions and dying.

This is not hyperbole. It is the conclusion of expert analysis ⬇️https://t.co/2dWHxb7UuL

However, these clarifications do not suddenly render AOC’s original, disingenuous remarks true.

Here are the best rebuttals and refutations of her controversial statements:

While the dude clearly is no Trump apologist, he’s not about to march lock-step with AOC on this issue.

I’ll put a dollar in the swear jar on his behalf for this next one:

Next, there’s Steven Crowder, who hasn’t yet been totally eradicated from the internet, thank goodness:

And, from Allie Beth Stuckey, whose voice needs to be amplified among millennials today:

By no definition is the Holocaust, in which Jews were rounded up & exterminated, comparable with the droves of migrants who voluntarily arrive at our border either illegally or seeking asylum, who are also given food, shelter and care. Get out. https://t.co/juSAk0ALpw

Your comments reveal total disregard for our sovereignty & a deep ignorance that belittles the horrors of the Holocaust.

If you’re worried about conditions at the border, why don’t you do something about it & support @RepMikeRogersAL’s bill securing billions in humanitarian aid?

Liz Cheney also took a whack at schooling AOC on exactly what makes a “concentration camp”, but her rebuttal is where things start to get dicy:

Please @AOC do us all a favor and spend just a few minutes learning some actual history. 6 million Jews were exterminated in the Holocaust. You demean their memory and disgrace yourself with comments like this. https://t.co/NX5KPPb2Hl

Ocasio-Cortez responded, “Also @Liz_Cheney, the fact that you employed the horrifying word ‘exterminated’ here (co-opting the language of the oppressor) tells us that it’s *you* that needs to brush up on your reading. Hope you enjoy defending concentration camps. I won’t back down fighting against them.”

“Co-opting the language of the oppressor.” Oh, my word.

Of course, “exterminated” refers specifically to the intent of the Nazis, not the reality of their actions. Their intention was to exterminate people whom they viewed as subhuman vermin, and it’s not inaccurate or insensitive to state that.

At least, folks like Elie Wiesel didn’t think so.

“I speak to you as a man, who 50 years and nine days ago had no name, no hope, no future and was known only by his number, A7713,” the Holocaust survivor, acclaimed author, and Nobel Peace Prize winner once said at a ceremony marking the 50th anniversary of the liberation of Auschwitz. “I speak as a Jew who has seen what humanity has done to itself by trying to exterminate an entire people and inflict suffering and humiliation and death on so many others.” [emphasis added]

Perhaps the best shut-down of AOC’s egregious statements comes from The Daily Wire’s Ryan Saavedra, in the form of this epic thread:

This claim by AOC is very deceptive: “This week children, immigrant children, were moved to the same internment camps where the Japanese were held in the earlier 20th century”

-The facility is Fort Sill Army Base

-It's the same facility that Obama used for the same reason