Heid Heitkamp Explains Why She Decided Not to Vote for Kavanaugh, And It’s Absurd 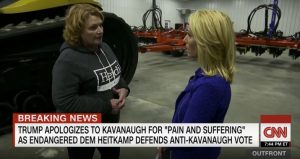 Body language can definitely say a lot about a person.

But if you’re a lawmaker, body language is a really, really bad excuse as to why you consider someone unfit for the court.

Nearly every single Democrat voted against Kavanaugh, and surely they all had their reasons.

But only Heidi Heitkamp of North Dakota decided to vote against him after watching his testimony on mute.

Yes, this is literally the reason she gave during a CNN interview, where they explained that she came to her decision to vote against Kavanaugh after re-watching his testimony with the sound off.

Check it out, from Hot Air:

“It’s something I do,” she said, “We communicate not only with words, but with our body language and demeanor.”

“I saw somebody who was very angry, who was very nervous, and I saw rage that a lot of people said, ‘well of course you’re going to see rage he’s being falsely accused,’ but it is at all times you’re to acquit yourself with a demeanor that’s becoming of the court,” Heitkamp said.

With regard to his demeanor, Heitkamp said the final straw was the way Kavanaugh went after her Democratic colleague from Minnesota, Sen. Amy Klobuchar, when he asked her if she had ever blacked out drunk after she had asked him the same question.

“When someone shows you who they are, believe them,” Heitkamp said.

This is an incredibly dangerous way to assess facts.

Heitkamp is a lawmaker, and yet she judges someone’s fitness for a court seat based on how they act when you can’t hear their words…after they’ve had their name dragged through the mud, their family humiliated, and the integrity, honesty, and good reputation they’ve worked for decades to display pushed aside over a few scandalous, unsubstantiated allegations?

I wonder how Heitkamp would appear with the sound off if she was accused of things she’d never done right before being placed in the most important position she’d ever been offered?

Judging Kavanaugh’s “demeanor” is the weakest argument the Democrats have against him. They would actually be more honest to just admit they hate him because Trump appointed him and they’re worried that they’ll no longer enjoy the advantage of a liberal, activist court.

Because this nonsense from Heitkamp just makes them look even more ridiculous.