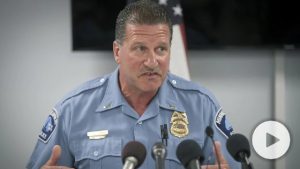 Bob Kroll, President of the Police Officers Federation of Minneapolis, came out swinging for the fences against the decision made by the Minneapolis City Council to take $8 million from the city’s police budget over to mental health and violence prevention programs.

This cut comes at a time when major cities like Minneapolis are experiencing major spikes in crime and violence. The decision also comes months after the death of George Floyd at the hands of Minneapolis police, which has triggered calls for police forces to be defunded and even abolished.

“The City Council is decimating the police department,” Kroll told Fox News. “The number of working officers is the lowest it’s been in 50 years. Murders, shootings, and other violent crimes are approaching record levels. Our officers are severely overworked, understaffed, and cannot keep the public safe with these cuts.”

Members of the Minneapolis City Council, however, lauded the policing plan that passed early Thursday morning as part of the city’s 2021 budget. The plan is called “Safety for All.”

Folks, it should be common sense that reducing the budget of local law enforcement agencies is a bad idea. When you slash budgets like this, you remove funds needed to keep people working on the force.

This means slashing budgets and moving money will reduce the number of officers on the streets, and thus, a rise in the crime rate. And minority communities will be the hardest hit.