He Died for This 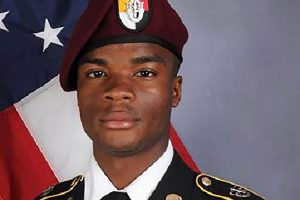 Sergeant La David T. Johnson served in a Special Forces unit of the U.S. Army. The twenty-five-year-old soldier loved doing stunts on his bicycle. His wife, Myeshia, is six months pregnant. On October 7, Sergeant Johnson and three other members of his unit were killed in Niger by members of the Islamic State. They are the first U.S. casualties in that country.

President Trump called Myeshia Johnson to express his condolences while she was on her way to the airport to retrieve her husband’s body. According to breathless accounts in the press, the President, instead of comforting the grieving widow, told her simply that her husband had known what he signed up for, but his loss still hurt anyway. Representative Frederica Wilson, a Democrat from Florida’s 24th congressional district who was riding with the family at the time, insists that those were President Trump’s words.

Obviously, common sense is a flower that doesn’t grow in everyone’s garden. Yes, our President is a native New Yorker – loud, brash, coarse, and crass. His tweets can drive even his most adoring supporters to distraction. However, it takes a special kind of idgit to believe that the President of the United States of America would really make that kind of call to a fallen hero’s widow. It also takes a special kind of trashiness to use a husband and father-to-be’s death as political fodder.

Even worse is the mainstream media, who have abdicated all journalistic responsibility in their blatant attempt to oust a sitting President. They have gleefully spread the comments made by Sergeant Johnson’s widow and mother, never once considering the anger and pain that follows the death of a loved one.

They have also fashioned Representative Wilson’s comments to fit their agenda. During an interview on MSNBC, the Congresswoman said the President told Myeshia Johnson, “something to the fact that [her husband] knew what he was getting into when he signed up.” Most press reports, however, create the impression that President Trump’s words and Representative Wilson’s accusation were precise and exact. But, even if they were, the mainstream media isn’t (gasp!) telling the whole story.

Effective communication is a tricky enterprise for anybody, even someone who’s at the top of his or her game. Since most words have multiple meanings, we depend on context and inflection to understand exactly what someone else is saying. Interpreting the right word or phrase the wrong way can have the same effect as Pandora opening her mythical box.

The press has shown only one perspective of the widow’s and President’s exchange, and they’ve provided no context for President Trump’s comments. According to their narrative, a racist, unfeeling lout called a soldier’s widow and said, “He knew what he signed up for.” Those are harsh words which are hard to forgive.

What if, however, their proper context was, “He knew what he signed up for but ran headlong into danger anyway, making the ultimate sacrifice so his wife and baby, as well as all Americans, could live in freedom?” Those are the comforting words of a caring, compassionate leader. They are the words of a President.

Sadly, we’ll probably never know for sure what was said on the now infamous phone call. General John Kelly, the White House Chief-of-Staff, reportedly listened as the conversation unfolded and said the President’s comments were thoughtful and appropriate. A partisan Representative with an ax to grind says otherwise. A grieving widow and mother agree with her account.

The American press just wants to push their narrative. It’s hard to see how their drivel could be worth the life of an American soldier. God speed, Sergeant Johnson, and thank you.