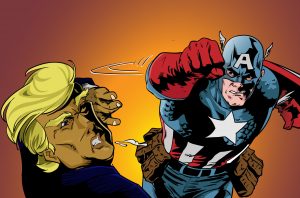 Well folks, here is where we find ourselves: Living in a world where an elected official can make a physical threat against the President of The United States without any sense of
foreboding or fear of repercussion.  Rep. Scott Hamann of Maine stated that “Trump is a half term president, at most, especially if I ev

er get within 10 feet of that p*ssy.”  Apparently Rep. Hamann had more to say. He used his Facebook account to say that Trump is “anti-American” and an “admitted rapist” who was “installed by the Russians.” Apparently the weed they smoke in Maine is laced with steroids. Ol’ Scott’s got a case of the rage!

In his opinion, the existence of Donald Trump as president threatens to undermine American democracy and values. Do you ever stop and ask yourself exactly what it is that Donald Trump has done to force these people to totally lose their minds?  They have become unhinged while claiming to be operating from a sane, tolerant, and educated intellect.  What has stirred up the spirit of hate that has lain dormant in their souls?  It’s worth exploring because these guys are losing their ever-loving minds over Trump.

But let’s face it: This is nothing new. Unless you’ve blocked out your memories of 12 years ago you may recall the same vitriol being aimed at George W. Bush. Remember when Cindy Sheehan wrote that she wished she could go back in time and kill a younger W? Charlie Brooker called for his assassination. Howard Dean exclaimed how much he hates Republicans and Game of Thrones viewers may recall a decapitated head on a stake that was unmistakably that of George W. Bush. So what’s the difference?  Nowadays W is remembered with an almost affable fondness of a bygone simpleton who spends his days painting portraits in seclusion.  The reason – Bush didn’t fight back!  The same can certainly NOT be said about one President Donald J. Trump.

Trump is a brawler. He is a street fighter. He’s accustomed to winning at all costs.  His campaign strategy was vastly different from the failed “roll over and take it because we are nice guys” approach attempted by John McCain and Mitt Romney.  And while many of us conservatives desire for the president to ease off of his need to counter-punch at every turn on Twitter we must face the fact that his vengeful jabs may not disappear very soon. The Washington establishment, the left and the media simply can’t fathom the idea that a man over whom they possess no control is occupying the Oval Office.

Regardless of his tactics, can he truly be labeled an extremist worthy of threats and hate speech? Is he really set on destroying the country we love?

As a point of fact one would be hard pressed to truly find one thing that Trump has said, done, or attempted in regards to agenda that is any different from presidents in the past. Let’s look at some examples:

One of the most hotly contested debates that accuses Trump of xenophobia as well as anti-muslim and racist sentiments is his persistence on extreme vetting of immigrants, a travel ban on unstable nations, a crackdown on those who would enter the country illegally, and a border wall along the southern United States. But wait a minute! Aren’t those the same ideas both Bill and Hillary Clinton espoused in their varied campaigns?  Let me help you…YES! Let’s face facts. Americans, by and large, want to end illegal immigration. What a shocker. Obama on the other hand wanted to get rid of federal immigration laws and promote sanctuary cities. Why does he get a pass? That’s not what Americans wanted.  Is it because he reminds you of a sitcom dad that fills out his March Madness bracket and hob nobs with celebs on late night TV? Is he too cool to be called out with facts? You decide.

What about Trump’s radical attempts to bring back Reagan era tax cuts and deregulation?  How dare he actually pursue free market ideas! Maybe we need to keep doing it the Obama way…you know, the way that doubled the national debt to $20 trillion. Near zero interest and gigantic federal spending was one helluva idea wasn’t it?  But again…that’s ok.  Obama was eloquent and sometimes when he gave speeches a tear fell from his eye. I also loved their Christmas card pictures.

Trump is working to make the US energy independent through drilling. Obama on the other hand said we can’t “drill our way out of the problem.” Presidents Nixon, Carter, and Ford thought differently about that, however.  Guess what.  While Obama continues to jet-set around the globe with the uber rich on his unending lavish post-presidential vacation President Trump may be the first president to actually make energy independence a reality.

Trump is accused of being out of touch with the common American and their needs and callous to the plight of the working family. Ask, however, the common working family how well Obamacare is working out for their needs, their budgets, and their health. Talk about out of touch. Whereas, it was the blue collar electorate in America’s fly-over states that propelled Trump to the presidency.

“But, but, but, but…Trump is a nasty man! He’s simply crude!” you say. “No one can have integrity and support Donald Trump.” Some of you younger folks out there throwing rocks through the Starbucks windows may be too young to remember a guy by the name of Bill Clinton.  He was president too once upon a time. You may know him better as Hillary’s husband although his actions rarely demonstrate it.  He bit his bottom lip in empathy when he spoke, played the saxophone, and worked hard for minorities as the “first black president.” He was also actually sued for sexual harassment and found guilty. Cool huh? And if that’s not enough guess what…he sexually exploited a 22 year old unpaid intern in the bathroom of the Oval Office and in the office itself.  Guess what he did then.  He perjured himself by lying about it under oath in an attempt to undermine her character and destroy her reputation. Now ain’t that something?

Obama wasn’t always the sweetheart you want him to be in your selective memory either.  He’s the guy that told supporters to get in the face of their enemies and bring a gun to a knife fight. What a sweetie.

I could continue on but suffice it to say that the spoken agendas of President Trump are traditionally conservative in their message and values.  Unfortunately those that have become unhinged on the left can’t manage to separate the message from the man.  To them Trump is an atrocity.  He is a media monster and public nightmare. In their mind it is Trump that has cheapened the office of the presidency.

One must admit that Trump is in a position in which he has no experience.  On the job training is necessary for him because it’s a role he’s never had to play. Regardless of the hate and spewed vitriol against him it would seem that his message and values are remaining consistent with the conservative message of days gone by. Unlike the politicians we’ve grown accustomed to, Trump actually tries to put actions behind the agendas. What a novel idea. It may just be that the office was cheapened long before he entered it and at this point we have no idea how to handle or understand true, decisive leadership that produces actual results.  Hold on folks…it’s going to be one interesting ride.