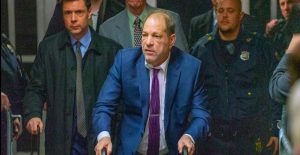 Well, it looks like disgraced Hollywood film mogul Harvey Weinstein is having a really, really bad day. And you know, it couldn’t happen to a more deserving guy.

Weinstein received a 23 year prison sentence for convictions of first-degree sexual assault and third-degree rape charges. Judge James Burke who presided over the case also told Weinstein he would have to register himself as a sex offender moving forward.

For the first-degree count of criminal sexual act, Weinstein was sentenced to 20 years in prison with an additional five years of supervised release. He was handed three years behind bars for the third-degree rape conviction.

“Thousands of men are losing due process. I’m worried about this country,” Weinstein said in the courtroom, according to the Associated Press, arguing that men are being accused of “things that none of us understood.”

“I’m totally confused. I think men are confused about these issues,” he added.

Uh, what? This guy raped women and he’s somehow confused that he’s going to prison? Perhaps he ate a lot of paint chips as a child? Maybe he lived under power lines? Seems perfectly reasonable that Weinstein would be tossed in the clink for many, many years after all he did.

Granted, there have been a lot of instances of false accusations against men in the wake of the #MeToo movement and yes, we definitely need to do a much, much better job of protecting due process. However, Weinstein himself seems to pretty much be guilty of everything he’s been accused of.

Weinstein was accused of sexual assault and harassment by more than 90 women, including actresses Ashley Judd, Gwyneth Paltrow, Salma Hayek, Uma Thurman, and many others. Are all of these people lying? Probably not.

And things are about to get even worse for Weinstein. He also faces charges in Los Angeles following an indictment in January just after his first trial started.