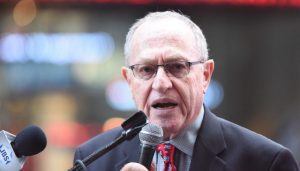 According to Harvard Law professor emeritus Alan Dershowitz, COVID vaccine mandates are far too serious of an issue for President Joe Biden to taking on alone through use of an executive order, so courts might end up rejecting them unless they are backed by federal legislative authority, which means they must come from Congress.

An even better idea is to totally toss out the idea of a vaccine mandate and allow folks to have access to information so they can make their own healthcare decisions.

Can’t for the life of me figure out why this very common sense solution is so hard for folks on the left to understand.

Oh. That’s right. The vaccine mandates aren’t about saving us from COVID. It’s about power.

“I think there are serious constitutional and statutory issues but particularly as to the right of the president,” Dershowitz, who appeared with legal experts Victoria Toensing, the former chief counsel of the Senate Intelligence Committee, and with former U.S. Attorney Joe diGenova, stated on the Monday episode of Newsmax’s “National Report.” “I don’t know of any case where so serious a mandate has been imposed only by the president, under a vague OSHA (Occupational Safety and Health Administration) statute.”

Under the rule enacted last week, tens of millions of Americans who work at companies with 100 or more employees will need to be vaccinated against COVID-19 by Jan. 4 or get tested for the virus weekly. OSHA said companies that don’t comply could face penalties of nearly $14,000 per violation.

“I do think that a proper case that came before the Supreme Court was a case where the legislature approved it, where it was signed into law where there was a real emergency and where the compelling case of scientific efficacy has been made,” Dershowitz stated.

Meanwhile, the Supreme Court might uphold mandates that have some exemptions, but the current rules came too quickly and involved only Biden’s order, said Dershowitz.

Toensing said she agrees with Dershowitz that legislation is needed, only on a state-by-state ruling, but diGenova said he, like Dershowitz, thinks the law needs to be on a federal level.

However, the Biden administration seems, “perfectly happy to push the edges of the law over the limits in order to accomplish what they want to do,” stated diGenova. “I think in this area of public health, however, I just think that there needs to be federal legislation, which I think is unlikely to happen, so it’s going to make it to the Supreme Court.”

Dershowitz then went on to argue for a national rule, pointing out that viruses “don’t recognize state lines.”

“Although the Constitution allocated police power to the state, [its writers] recognized through the Commerce Clause that there are certain instances where you just need national legislation,” Dershowitz went on to say. “If Congress won’t pass it, hey, that’s what democracy is all about. We don’t always get what we want…I think state by state would be ineffective. People cross over state lines too easily, remember. It’s not like getting into the country. There are no restrictions. You can’t impose restrictions on people going from New York to New Jersey.”

People really, really need to go re-read the Constitution. Especially the part about the Tenth Amendment which relegates this pandemic to the state, not the federal government.