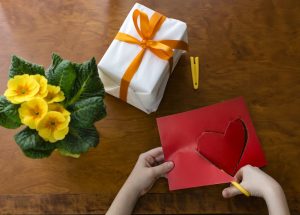 Yes, this is a thing now.

A school in Australia has changed the holiday known around the world as “Mother’s Day” to the very bland “Acknowledgement Day,” which basically just sounds like the safest, most politically correct name for literally any holiday ever.

We should all just start wearing grey and addressing each other using numbers at this point.

The Daily Mail reports that in the past, the Brunswick East Primary School in Melbourne, “hosted a fundraising stall where children could buy Mother’s Day merchandise such as mugs, trinkets, candles and soaps.”

Now, the stall will be called the “appreciation stall,” where children can buy gifts for…anyone.

You know, like any other day of the year.

In a newsletter, the school principal wrote:

You will see further in this newsletter a fantastic poster for our first “Acknowledgment Day.” We will be holding 2 of these days each year; one to coincide with the “traditional” Mother’s Day and the other to coincide with the “traditional” Father’s Day. There has been a lot of discussion about the reason we celebrate these days and the naming of the celebration. I believe that days like this are important because we do need to stop and show gratitude for those around us. However, it is also very important that we make these occasions as inclusive as possible.

I sincerely hope that this change in name will show that we as a community recognize that our families are not made up of any particular combination of people and that we no longer subscribe to a binary world. I am sorry that in the past we have offended some members of our community and I hope that this acknowledgment goes some way to address any hurt which has occurred in the past.

Seems like this whole non-binary thing could get awfully expensive for these kids.

This is not the first school in Australia to ban a gender binary holiday, on April 10th, 10Daily reported that:

The Learn and Laugh early childhood centre in Drummoyne emailed parents on Tuesday to let them know that Mother’s and Father’s Day activities would no longer be going ahead. “We have spent a lot of time discussing and reflection on this and believe we want to be a more inclusive centre,” an email from acting director April Howlin reads. “We want to include all families here at Learn and Laugh regardless of their family dynamics. “Instead, we have decided to do family and friends day at different times throughout the year. That way anyone close to the children can come and take part.”

Here’s a novel concept: kids have lacked fathers or mothers since long before anyone was concerned about being “binary.” Parents, sadly, walk out on their kids or pass away, and for as long as there’s been a Mother’s Day and a Father’s Day, there have been kids who have had a hard time with these days.

There are also parents whose kids are also no longer part of their lives.

Being offended or hurt is part of life, and we used to know how to just deal with it without robbing everyone else who is not hurting in the very specific way that we are from being labeled politically incorrect for just wanting to get their mom some chocolate or their dad some power tools for the appropriate holiday.

And just as a very striking reminder, the Daily Wire points out why Mother’s Day was created in the first place:

Mother’s Day was first celebrated in 1908, when Anna Jarvis held a memorial service for her mother at St Andrew’s Methodist Church in Grafton, West Virginia. Her mother, Ann, who had nursed soldiers on both sides of the Civil War, had died in 1905. The idea of making the day a national holiday was rejected by Congress In 1908, but by 1911 all U.S. states observed the holiday. Jarvis later resented the commercialization of the holiday and wound up organizing boycotts of Mother’s Day. She felt people should simply write to their mothers instead of purchasing ready-made cards.