What Happens When We’re too Busy Protesting Slavery to Do Anything About It? 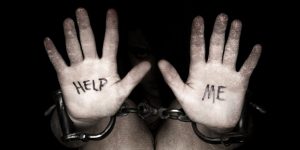 In 1936 British statesman Sir Austen Chamberlain spoke to members of the Birmingham Unionist Association at their annual convention. Referring to Germany’s failure to honor the Treaty of Locarno, he said,

“It is not so long ago that a member of the Diplomatic Body in London, who had spent some years of his service in China, told me that there was a Chinese curse which took the form of saying, ‘May you live in interesting times.’ There is no doubt that the curse has fallen on us.”

Even though no one has been able to trace those words to anyone from China, it would be easy to think Sir Austen was looking into a crystal ball at the time, commenting on what he saw in America today. While we’ve endured protests and conflict over the last four decades, events of the last few months take us back to late 1960’s and early 1970’s when the country looked to be tearing itself apart over civil rights and the Vietnam War.

Much of today’s angst and unrest is simply a collective temper tantrum over Donald Trump’s electoral win last November. For eight years previously, half the country was told they didn’t have to tolerate, entertain, or even recognize views and opinions they didn’t like. Reality, it seems, doesn’t sit well with those folks.

Some of the troubles we’re experiencing, however, are the result of our failure to have a reasonable and necessary national conversation about slavery and its aftermath. Rev. Martin Luther King, Jr. managed to get that conversation started. Reason, however, died with the last breath he drew, and emotions have driven it ever since.

Social justice is today’s popular buzz word. Social justice warriors think punishing people for what they believe and say somehow brings justice to those they see as oppressed. Black Lives Matter seems to think destroying neighborhoods and executing law enforcement officers is an acceptable form of protest, even when evidence prove they’re on the wrong side of an issue. They, along with AntiFa, leftist politicians, and others also think tearing down statues and rewriting history will atone for slavery.

Slavery was an abomination. The number of Americans who believe anything else is miniscule, despite what politicians and the “news” media try to tell us. We’re led to believe that one half of the country is valiantly trying to end the scourge of human bondage while the other half stubbornly refuses to yield. That sounds oddly familiar, but when you come up with a good narrative that’s working, you ride it as long as you can.

The horrors of slavery are burned forever into our nation’s psyche. That abomination will haunt America as long as the stars and stripes fly. However, all that energy is directed towards an institution that ended 154 years ago.

That doesn’t mean black Americans were accepted, tolerated, or given any kind of a chance by society. It doesn’t mean the descendants of America’s slaves haven’t fought and struggled for every advance they’ve achieved. It does mean that no American can legally own another human being or force them to work involuntarily and without pay. Further legislation has made discrimination in any form illegal. And yet, the protests continue.

The city of New Orleans spent $2 million removing Confederate statues to protest slavery. Baltimore and Annapolis, Maryland have also spent money in an attempt to erase history, as have Boston, Brooklyn, and the University of Texas. The NFL has jumped on the protest bandwagon, with players kneeling during the National Anthem. Their average salary is just over $2 million per year, or $125,000 per game. Just one player from each team taking a knee represents $4 million dollars’ worth of protest per game, assuming no bye weeks.

Demonstrations against statues, politicians, or any other targets represent money spent to bus in protestors and pay their promised wages. Other participants rack up missed work time and transportation expenses. Cities pay extra money for public safety, plus they have to foot the bill to repair and rebuild neighborhoods when demonstrators turn violent. That’s a lot of time, money, and effort spent attacking an institution that no longer exists and wouldn’t be tolerated if it did.

Except, slavery has once again become a thriving enterprise. Around the world, it’s estimated that almost twenty-one million people live in bondage, many of them in the United States. Slavery today occurs different ways in different countries, but in every case people are somehow coerced to work for the financial benefit of those holding them. Examples include sex trafficking, bonded labor (debtor’s prison), and forced labor, which is most like what the Emancipation Proclamation ended in 1863. In the U.S., sex trafficking is estimated to be the prevalent form of slavery, though others exist.

What if the resources used protesting slavery of old were spent fighting slavery as it exists today? How many people’s lives would change if those millions of dollars, along with all that rage, were directed at shutting down human traffickers and bringing them to justice? Can any of us imagine a world where the only picture on a carton of milk is of Elsie the Cow? No, we can’t, but we could.

If we Americans would put our differences aside long enough to work toward this common goal, we could change the entire world. The great injustices and offenses we fight over amongst ourselves become pure foolishness when compared with the plight of a child who is stolen from her or his family and forced to have sex with thirty-five to forty different people each day. Our differences are laughable when placed against the horror of a man or woman being kidnapped and forced into a lifetime of hard, unpaid labor, or pressed into service to work off a dead relative’s debt that can never be repaid. In reality, our troubles look small when viewed from a modern slave’s perspective.

Can we really believe, as a nation, that making our point and getting our way politically is what’s most important? If so, we’re already lost.