WHAT HAPPENED: Hillary Blames Everyone! 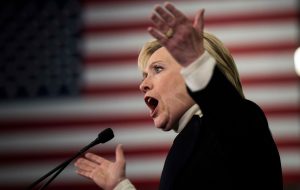 Hillary Clinton’s new book, What Happened, is set to be released next week, but leaked excerpts show her playing the “blame game” on why she lost the presidency.

Seriously…is anyone tired of this chick yet?

In the book Clinton vents her frustrations about working with some of the Democratic Party’s most powerful figures leading up to her eventual defeat to President Trump. And many in the party are hitting back!

In one passage, Clinton says former President Obama put her in a “straightjacket” when he told her to refrain from attacking her rival, Sen. Bernie Sanders (I-VT), in the Democratic primary over fears it would divide the Democratic Party heading into the general election.

It’s doubtful the book contains any passages about DNC leader Debbie Wasserman Schultz losing her job when leaked emails showed she conspired to guarantee Clinton’s nomination as the Democratic candidate. It is also likely to not contain excerpts about having debate questions given to her prior to her debate with Trump. When the plan is to blame everyone else you typically don’t talk about how you got caught cheating.

Clinton also mocked Sanders’ policy proposals as “pie-in-the-sky” endeavors and called his supporters sexist. She equates the Sanders campaign to promising everyone “a pony.”

Clinton also complained that Sanders’ attacks during the primary did “lasting damage” to her shot at winning the general election, even going so far as to accuse Sanders of aiding Trump.

As Brietbart.com says, “Sanders responded to Clinton’s criticism Wednesday by simply saying Democrats need to “look forward, not backward.” But others in the party have not been so forgiving of her statements.”

The Democratic Party is recognizing the damage Clinton’s blame shifting is doing to their future. “The best thing she could do is disappear,” one former Clinton fundraiser and surrogate who played an active role at the convention told the Hill. “She’s doing harm to all of us because of her own selfishness. Honestly, I wish she’d just shut the f— up and go away.”

Clinton has blamed several people and groups for her 2016 election loss, including former FBI Director James Comey, the Russians, the press, Obama, and the Democratic National Committee…she even blamed BLAZING 80 degree weather for her fainting spell during  a 9/11 memorial. What remains to be seen in this book is whether she takes any responsibility for losing the election. From the looks of it, this book seems to be yet another one of Hillary’s classic hissy fits. 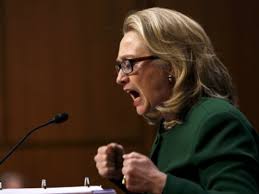