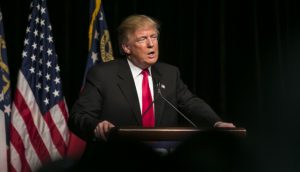 A new poll put out by the people over at the Washington Examiner/YouGov reveals that almost half of registered voters want to see President Trump leave the world of politics if he loses to Joe Biden on Election Day.

The poll revealed that 48 percent of those surveyed said that the president should leave politics altogether if he’s defeated in what many are calling the most critical election in our nation’s history. Results also reveal that 17 percent want him to run for president again in 2024, while another 18 percent want him to leave politics and support candidates who share similar policy positions. Around 7 percent of voters chose “something else,” while 10 percent said they didn’t know.

Trump has a massive Twitter following and frequently commented on politics and current events before he became a candidate for the presidency in 2015. He remains a big draw on the campaign trail. If he loses, he would be eligible to run again for a single term under the 22nd Amendment.

W. James Antle III writes in his report, “Most voters are very or somewhat likely to accept the results if their preferred candidate loses by a large margin, with 65% saying so. Democrats and Republicans are equally likely to accept a large election loss, 63% and 64% respectively.”

At the end of the day, we need to be hoping and praying that we don’t have to worry about this scenario. Americans hopefully have not been so brainwashed by the mainstream media that they’d willingly vote for Joe Biden, a man who is clearly not physically fit — or mentally fit — to discharge the duties of the highest office in the land.

But if we do, it’s probably best that, at Trump’s age, he just back other candidates instead of running for president again. It’d be great to have him in the office for a second time regardless, but we need to be realistic.