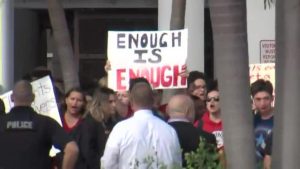 Across the country, high school students walked out of class on Wednesday to protest gun violence in schools while some remembered the 17 victims who died at the school shooting in Parkland, Fla., exactly one month ago.

Outside the White House, young protesters chanted: “Hey hey, ho ho! The NRA has got to go!”

Some students used the opportunity to say that this was their way of “standing up to Trump.”

The national organizers of the event called for a 17-minute walkout at 10 a.m. local time in every time zone. In some locations violence and vandalism erupted on campus during the protests.

At Antioch High School near Nashville, TN, social media videos captured a brawl inside the school. Outside, students can be seen tearing down an American flag.

In defense of their walk-out, many students claimed they were exercising their 1st amendment rights even though schools can discipline students for walking out of class, even for a political protest.

While the seeming solidarity amongst most students across the country seems honorable I tend to question their motives and intent as both seem a bit misguided.

Protesting the NRA and going so far as referring to it as a terrorist organization is completely ignorant and unjustified. No NRA member has ever been involved in a mass shooting scenario.

Instead I’d like to know where the outrage against the real culprits is being demonstrated.

Where is the outrage and protests against Broward County, Florida and federal law enforcement officials that ignored 45 calls that named the Parkland shooter as a potential threat?

Where is the outrage against the  school which did not follow up on the tips they had collected on the shooter, including those from when he expressed his violent fantasies to his therapists?

Where is the outrage against the fact that the government did not have the information necessary to make it impossible for the school shooter to buy a gun?

Where is the outrage against the mental illness that makes these tragedies a reality?

It’s far easier to place blame on organizations that represent guns and the constitution such as the NRA. It’s easier to say this is an “American problem.”  Even though it’s not.

The four worst school massacres in the history of EARTH (all used guns):

It’s not a uniquely American problem. It’s a people problem.

Protesting high schoolers would do well to know that these countries have far stricter gun laws than the US.

They would also do well to remember that disarming a populace is always the first step in ultimate subjugation and even the threat of potential invasion.

And one more thing about guns being an American problem….consider the picture below. 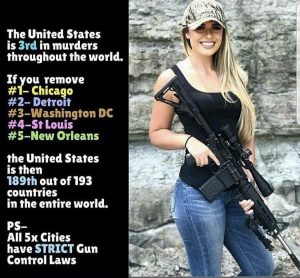