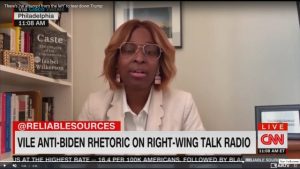 When you do the kind of work I do, writing on politics all day long, you’re bound to come across some pretty extraordinary examples of human stupidity. It comes along with the territory. You’d think doing this on a daily basis would numb me to the ridiculousness of said stupidity and thus make it incredibly difficult to leave me shocked or surprised.

My friend, you underestimate just how deep the roots of idiocy plunge in the realm of the left-wing.

Take, for example, Errin Haines. Haines was a guest on notoriously anti-Trump news network CNN where she made the claim that there is no news network dedicated to taking down President Trump.

Yes, she said this while appearing on CNN. A news network where almost all of its broadcast time is spent crafting narratives to destroy the president. And, of course, there’s all of the other mainstream media outlets who pretty much follow the same playbook.

Perhaps this lady doesn’t actually read or watch any news. There has to be some sort of excuse for saying something that dumb.

Stelter then turned to Haines, asking whether she knew of any networks on the left that were as dedicated to destroying Trump. “When you see entire media companies essentially exist to tear down Joe Biden, is there an equivalent of that on the left, tearing down Trump?” he asked.

“There really isn’t. What I would say is it’s really a diet of this type of information that a lot of these voters are getting,” Haines replied. “A lot of the voters I talk to, I can — when I interview them, I do hear them saying a lot of the talking points that sound very familiar from some of these shows that I try to listen to when I’m out on the campaign trail or when I’m home, watching TV. You can hear these comments being echoed by voters.”

Is Haines being for real right now? It appears she most definitely is. Almost every piece of news that comes out in the mainstream media is tied back to Trump as being his fault. This is a narrative that wouldn’t exist if it weren’t for mainstream media outlets like CNN and ABC News, ect.

The president has been under constant attack by people like Don Lemon, Anderson Cooper, Rachel Maddow, and many others. How can these folks sit here, with a straight face, and not acknowledge that the sole job of CNN right now is negative Trump coverage?