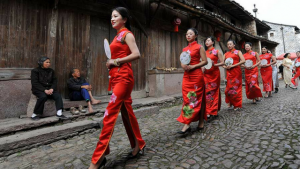 A teenage girl in Utah has recently been slammed on social media for posting pictures of her prom dress. But after the controversy arose, she’s now gotten some unlikely praise from across the globe.

Why, might you ask, would hundreds of thousands of Twitter users with presumably much better things to do than harass an innocent prom-goer over her choice of attire?

I’ll give you a moment to recover.

Keziah Daum, a high school student with no Chinese heritage, found a Chinese-style dress at a local vintage shop and thought it would make a lovely prom dress. There was only one problem, according to Twitter–she’s not Chinese.

She was accused of knowing nothing of the history of the dress, because if she had, according to her trolls, she would certainly never dare wear it.

What they didn’t realize was that Keziah did know the history of the dress. Upon finding it in a vintage shop, she purchased it and went home and researched it. In its history, she found what she described as a “beautiful message.”

She told the South China Post, “one person commented it represented female empowerment. If that is the case, then it is a wonderful message for any young woman my age to learn, regardless of culture and background.”

According to the Twitter trolls her pictures amassed, however, who clearly assumed she did not know the history, due to the color of her skin, the dress was totally verboten.

“Very elegant and beautiful! Really don’t understand the people who are against her, they are wrong!” was one comment on an article on the dress in the Wenxue City News. “I suggest the Chinese government, state television or fashion company invite her to China to display her cheongsam!”

“It is not cultural theft,” wrote another. “It is cultural appreciation and cultural respect.”

“Culture has no borders,” wrote a Weibo user. “There is no problem, as long as there is no malice or deliberate maligning. Chinese cultural treasures are worth spreading all over the world.”

The unexpected support from mainland China was so significant, even the blatantly left-leaning New York Times covered the pushback to the American prom dress shaming.

“It’s ridiculous to criticize this as cultural appropriation,” Zhou Yijun, a Hong Kong-based cultural commentator, told NYT. “From the perspective of a Chinese person, if a foreign woman wears a qipao and thinks she looks pretty, then why shouldn’t she wear it?”

Keziah did look lovely and she was a bold girl for taking a stand! It’s awesome to see so many Chinese people recognize her appreciation of their culture. I think we can chalk all the whining up to one big fat intersectional FAIL.