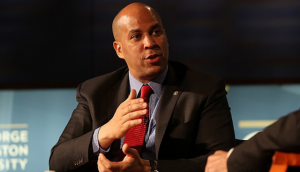 A group of sore losing Democrats decided to walk out of the Senate Judiciary Committee meeting on Friday morning after it became clear to them that the GOP has all the votes needed to recommend Kavanaugh to the Senate.

If you listen closely, you can hear the sound of left-wing snowflakes crying themselves silly in the streets. Poor little lambs.

“Democratic senators Kamala Harris of California, Mazie Hirono of Hawaii, Sheldon Whitehouse of Rhode Island, Richard Blumenthal of Connecticut and Patrick Leahy of Vermont walked out of the meeting in protest,” ABC News reports. “Staff for Sen. Cory Booker of New Jersey left the room, signaling he might walk out too.”

The protest followed the announcement by Republican Sen. Jeff Flake, one of the key “swing votes,” that he plans to vote to confirm Kavanaugh, which, as NBC News reports, “guaranteed that the committee would vote to send the nomination to the full Senate.”

After committee chair Chuck Grassley’s announcement that the committee will vote at 1:30 p.m. Friday, NBC notes that Booker and Harris “sat there in silence” when they were called to vote. “They’re not answering because this is so unfair,” said Sen. Amy Klobuchar (D-Minn), NBC reports.

Ranking Senate Judiciary Democrat Dianne Feinstein — who sat on Ford’s uncorroborated allegations for weeks before handing them over to the FBI days before a scheduled committee vote — promptly painted the Republicans as the ones who have politicized the process.

“I hoped we would do better and show women that our country, our committee, has in fact changed,” said Feinstein, ABC reports. “This isn’t a political battle for power, as some have said. This is a serious undertaking with serious allegations. While the Republican strategy is no longer attack the victim, it is ignore the victim. The entire country is watching now how we handle these serious allegations.”

In other words, Feinstein hoped that the committee would chuck that whole notion of “innocent until proven guilty” and deem a man a rapist based solely on the hearsay of an unreliable witness.

And we wonder why there’s so much injustice in modern America these days?

Here’s to hoping Kavanaugh gets confirmed and proves to be a valuable asset to freedom loving Americans everywhere.