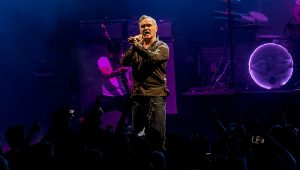 Something of a Milo Yiannopolous before Milo was even a twinkle in his father’s eye, Morrissey has long been shredding the neatly-cut lines separating right and left.

The fact is—with the exception of the lemming class who haven’t yet mastered critical thought—most people don’t fit any one social or political mold 100%. In this age of identity politics, this is an uncomfortable truth. To the conform-or-die totalitarian leftists, it’s pure heresy.

To Moz, it’s just another Monday.

The iconic former Smiths frontman appeared on the Tonight Show with Jimmy Fallon last week as the talk show’s musical guest. He made some pretty serious waves after a few hawk-eyed snowflakes noticed that he wore a pin expressing his support for the right-wing For Britain political party.

Cue the eye-roll. How dare a public figure have political beliefs. The nerve of that guy!

For those wondering, For Britain espouses such hateful beliefs as bottle-necking the deluge of immigrants to Britannia while they work on getting native-born Brits out of the cycle of homelessness:

“Immigration to Britain must be dramatically reduced and stability restored,” the For Britain site reads. “Each year, 100,000s of people migrate to the UK. Common sense should tell us that this is simply not sustainable. In order to end the housing crisis in the UK, we must reduce demand. This is common sense. Increased population inevitably brings about increased demand for housing, which inevitably drives house prices up. Government after government have failed to address this reality.”

“British law must be upheld and immigration and asylum laws must be applied. Those in the UK illegally should face deportation. All non-British citizens known to be involved in or supportive of jihadism must be deported.”

Heck, that makes me want to vote for this party, and I’m as American as Terry Gilliam.

So, when Morrissey wore a pin proclaiming his appreciation with the party on the Tonight Show, all hell broke loose.

Morrissey has committed career suicide. You cant be the voice of the loner & sensitive outsider & support a far right racist micro-party such as For Britain. He has destroyed his raison d'etre & needs to understand that what he stands for is unacceptable. https://t.co/C9NIn76wLS

“Career suicide.” Because the dude hasn’t already secured his position as one of the British Empire’s most meaningful contributions to the world and surely will drift off into irrelevance for being politically conservative. Gotcha.

This dude is going to toss a metal-coated plastic CD onto a bonfire? Has he considered the environmental impact of this futile act of protest?! That’s gonna jack up his carbon footprint!

Oh, joy. Doesn’t take long for these folks to pull the “deplorables” card and malign individuals rather than rebut their ideas.

Morrissey’s music has also reportedly been banned from the world’s oldest record shop, Spillers, landing him right up there with Oscar Wilde and James Joyce and other immortalized British wordsmiths whose work has been banned by the “cultural gatekeepers”.

What’s hilarious is that none of these folks seemed to notice or give a damn when Morrissey first made his support of For Britain public almost a whole flippin’ year ago.

“I have been following a new party called For Britain which is led by Anne Marie Waters,” Moz said in a June 2018 interview with Tremr. “It is the first time in my life that I will vote for a political party. Finally I have hope. I find the Tory-Labour-Tory-Labour constant switching to be pointless.”

“For Britain has received no media support and have even been dismissed with the usual childish ‘racist’ accusation,” he continued, all but prophesying what would happen to him just eleven months later. “I don’t think the word ‘racist’ has any meaning any more, other than to say ‘you don’t agree with me, so you’re a racist.’ People can be utterly, utterly stupid.”

It’s not often that a militant vegan gets such a hearty “amen” from me, but the man who said he despises racism, despises fascism, and would “do anything for his Muslim friends” yet still has the balance to condemn the social justice mob for their hatred of free speech definitely deserves it.

“Anne Marie Waters seeks open discussion about all aspects of modern Britain, whereas other parties will not allow diverse opinion,” he continued, elaborating on the party and the sorry state of free speech in Britain. “She is like a humane version of Thatcher … if such a concept could be. She is absolute leadership, she doesn’t read from a script, she believes in British heritage, freedom of speech, and she wants everyone in the UK to live under the same law. I find this compelling, now, because it’s very obvious that Labour or the Tories do not believe in free speech…”

“I know the media don’t want Anne Marie Waters and they try to smear her, but they are wrong and they should give her a chance, and they should stop accusing people who want open debate as being ‘racist’,” he concluded. “As I said previously, the left has become right-wing and the right-wing has become left – a complete switch, and this is a very unhappy modern Britain.”

I expect this limpwristed ban from the thought police to have roughly the effect of pushing down a beachball. As Breitbart so beautifully puts it:

While most celebrities today succumb to the totems and protocols of political correctness, Morrissey abstains from such behavior. This may be in part because he always seems a little ticked off. He often seems to see the world as cruel and crushing, but always finds the smile, the joke, the light that never goes out. And the fact of the matter is that for his fans, no record store ban will make a bit of difference.