Guess How Many Democrats Have Met With Trump’s SCOTUS Nominee? 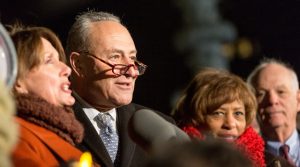 In case you weren’t already well aware of how egregiously divided this nation has become in recent years, particularly in the political realm, look no further than the scuffle in Washington over Trump’s SCOTUS nominee, Judge Brett Kavanaugh.

Typically, with a vote coming up in a mere matter of months, folks from both sides of the aisle meet with the nominee to get to know him or her and ask questions pertinent to the individual’s appointment to the bench.

Guess how many Democrats have done this with Kavanaugh? Go ahead. Take a stab at it. We’ll wait.

In the two weeks since President Trump nominated him to succeed the retiring Justice Anthony M. Kennedy, Judge Kavanaugh has met with 23 Republicans, and not a single Democrat. Senator Chuck Schumer of New York, the Democratic leader, said in an interview Monday that he would not meet with Judge Kavanaugh until the top Republican and the top Democrat on the Senate Judiciary Committee reach agreement on what documents should be produced.

The snubbing is (of course) being led by the very bitter Democratic leader in the Senate, Chuck Schumer. “I have told my caucus that I’m waiting, and I think most of them are following me,” the New York Democrat said.

Senate Democrats are hoping to push back Kavanaugh’s confirmation vote until after the mid-term elections in November, but that won’t happen. Senate Republican leaders have made clear they will proceed, with or without the “courtesy” visits.

Ever see one of those petulant toddlers at Walmart stomping their feet, screaming, crying, throwing themselves on the floor, all because mom said “no” to a new toy? That’s a great visual representation of Sen. Chuck Schumer and the vast majority of Democrats in Congress.

These folks need to stop playing political games and actually apply themselves to doing what’s best for the country, and right now, that means engaging with Kavanaugh, whether they want to or not.