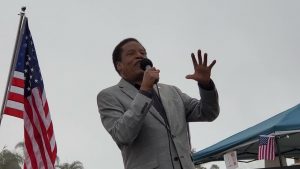 Author, radio talk show host and current Republican California gubernatorial candidate Larry Elder spoke with Newsmax where he stated that folks living in his state are angry with Gov. Gavin Newsom for all of the problems they are currently facting and said “they want him gone” when the recall election happens on Sept. 14.

“You have the [wildfires], you have the crime, you have the homelessness, you have the crappy quality of education in public schools in urban settings, and the way this man arrogantly shut down the state while ignoring science, and while exempting himself from the very mandates he jammed down the throats of the California people,” Elder said while speaking on “The Chris Salcedo Show” Monday. “They are angry, they want him gone, and I believe he will be gone come Sept. 14.”

California conservatives launched the bid to oust Newsom, who won the office in 2018, over issues of immigration, taxes, homelessness, the death penalty, among other issues, according to a CNN report.

But the signature drive really took off after Newsom shut the state down amid the COVID-19 pandemic and imposed restrictions and stay-at-home orders, many of which, he was caught not observing himself.

Activists were able to amass more than the almost 1.5 million signatures required to put a question on the ballot asking if he should be removed from office.

The ballot then asks the voter who should replace him.

“It is what it is. This is a Republican recall,” Newsom went on to say in during an exclusive interview with CNN right before the latest signature tally. “An RNC-backed Republican recall of white supremacists, anti-Semites and people who are opposed to immigration and immigrants is an accurate assessment of who’s behind this recall.”

Elder said the restrictions during the pandemic is what really did Newsom in with the state’s residents, including independents and even Democrats that supported him just two years earlier.

“What really hurt people, why 1.7 million people signed the petition to have this man recalled, a good third of them or so were independents and Democrats who just voted for him a couple years earlier, is the way he ignored science and shut down this state in the most Draconian way, compared to all the other 49 states, while having his own kids enjoy in-person private education, and exempting his own winery (from the restrictions),” Elder added. “Sitting up there at the famous French Laundry (restaurant) with the very lobbyists that drafted the mandates that they were violating by not wearing masks, and by not engaging in social distancing.”

The last time a Democratic governor was kicked to the curb by California residents was Gray Davis back in 2003. He was replaced by action movie legend Arnold Schwarzenegger.