The Growing Industry of Protesting! 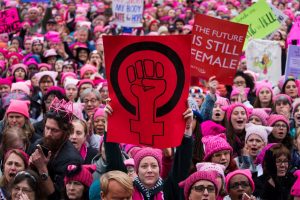 This is being written on the heels of the global Women’s March 2018. Millions of women and some men, around the world in general, and in America in particular, marched, basically in protest of President Trump. However, the marches included anything and everything that is not compatible with their progressive, leftists, feminists, ideology.

As I watched news reports, read some of the signs, and heard the chants, it begin to dawn on me that America is a nation of protesters who are protesting like never before.

True, there have been almost numberless protest and marches on Washington over the years, but the stream is turning into a dangerous “Red” socialists tide. The right to free speech is being labeled hate speech for any group disagreeing with leftist ideology.

Accusations have been made that numbers of these are “career protesters” who actually get paid for carrying signs or wearing masks and burning police cars and businesses around the area of the protest. I don’t know about the “marchers” but I do know that many of the “march” organizers make a good salary lining up the protest.

The Crowd Counting Consortium is a one year old organization that was begun to provide an accurate estimate of the number of people who participated in the Women’s March on Washington (and its affiliated Sister Marchers worldwide) on January 21st, 2017. The CCC collects publicly available data on political crowds reported in the United States, including marches, protests, strikes, demonstrations, riots, and other actions.

The Crowd Counting organization states: “Since the Women’s March on Washington on Jan. 21, 2017, the CCC has recorded more than 8,700 protests in the United States through Dec. 31, 2017. About 74 percent of those protests were either against Trump administration policy or on issues that conflicted with the president’s viewpoint, such as protests against specific police shootings of black people.”

Kimberley Strassel, who writes the weekly “Potomac Watch” column for The Wall Street Journal, tells of an experience involving her three children in a discussion over the meaning of the right to free speech following a shouting match that they had gotten into among themselves at the dinner table.

After the twelve year old son gave a clarion clear definition of the First Amendment, the nine-year-old was given the right to speak. She said she had no idea what all the big words her brother used meant, but “it doesn’t matter, because free speech means there should never be any restrictions on anything that anybody says, anytime or anywhere.” She then added that the family could all start by listening more to what she says.

Then, the five-year-old was given opportunity to express her understanding of the right to free speech. Focusing on both her brother and sister with a ferocious stare, she said: “Free speech is that you can say what you want — as long as I like it.”

This is becoming the enforced policy of so many protest groups, especially on college campuses nationwide. You can say what you want as long as we, the progressive, socially-sensitive, sexually-liberated, gender-free “woken” ones like it.

Conservative town hall meetings are a thing of the past because the protesters, heckled, hounded, and drowned out any speaking or citizen interaction by someone they didn’t like.

Today any speaker who dares to attempt to speak on almost any college campus and hold constitutionally backed positions on such topics such as First or Second Amendment Constitutional rights will be afforded no free speech rights. Anyone whose speech would be in favor of free market economics, racial equality, traditional family values, or is against homosexuality, same-sex marriage, and gender or identity politics is labeled as a right-wing fascist, homophobic, misogynistic creep, whose “hate speech” will not be allowed.

Attorney General, Jeff Sessions, in a recent speech at the Georgetown Center for the Constitution, referred to the anti-free speech protesters use of the “heckler’s veto”:

“This permissive attitude toward the heckler’s veto has spawned a cottage industry of protestors who have quickly learned that school administrators will capitulate to their demands.

Protestors are now routinely shutting down speeches and debates across the country in an effort to silence voices that insufficiently conform with their views.

A frightening example occurred this year at Middlebury College. Student protestors violently shut down a debate between an invited speaker and one of the school’s own professors. As soon as the event began, the protestors shouted for 20 minutes, preventing the debate from occurring.

When the debaters attempted to move to a private broadcasting location, the protestors—many in masks, a common tactic also used by the detestable Ku Klux Klan—pulled fire alarms, surrounded the speakers, and began physically assaulting them. In short, Middlebury students engaged in a violent riot to ensure that neither they nor their fellow students would hear speech they may have disagreed with.”

When Charles Murray go up to speak, the students stood and turned their backs on him in silence. Then they read loudly and in unison from sheets of paper: “This is not respectful discourse, or a debate about free speech. These are not ideas that can be fairly debated, it is not ‘representative’ of the other side to give a platform to such dangerous ideologies. Science has always been used to legitimize racism, sexism, classism, transphobia, ableism, and homophobia, all veiled as rational and fact, and supported by the government and state.”

Then continuing in a unified chant: “Hey hey, ho ho! Charles Murray has got to go. Racist, Sexist, Anti-gay. Charles Murray, Go away!”

The industry of “protesting” seems to be gaining market capital. If you want in on it, all you have to do is conform to the five-year-old’s definition: “Free speech is that you can say what you want — as long as I, the loud, liberal leftists, like it.”