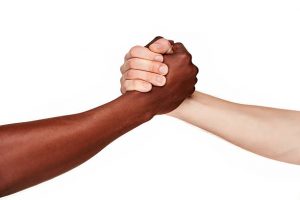 On October 1 last year, Officer Tim McMillan of the Garden City, Georgia Police Department made a routine traffic stop. He approached the car, likely with the intent to issue a ticket for texting while driving. What happened instead changed his life and, possibly, the life of a nation. He was so upset by that encounter that he posted about it on Facebook. It’s estimated that initial post has been seen more than 400,000,000 times by people around the world. 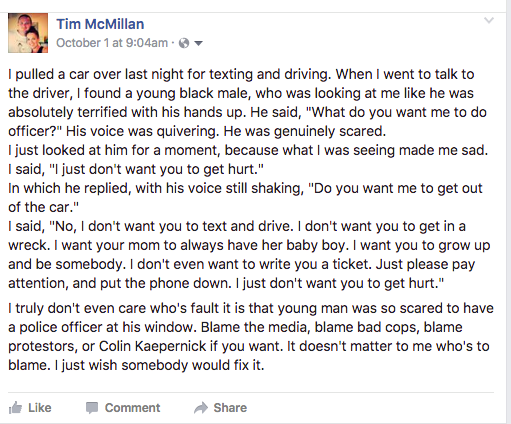 His closing words, “…I just wish somebody would fix it,” is what almost everyone says after venting about a problem they don’t know how to correct. But, sounding off is usually the closest any of us ever get to being the somebody who fixes anything. After taking some time to think about what he’d posted, Officer McMillan decided to be somebody.

Our politicians seem to believe that the first step toward solving any problem is to hang the blame for it on someone else, preferably a rival from another party. Officer McMillan will likely never be a successful politician. He decided to forgo the blame game and look for solutions to the problem he saw between himself and a teenaged boy.

The result was The Four Trees Project. Their mission is, “To spark a world of change by setting the foremost standard for law enforcement performance.” Since founding the organization, Lt. McMillan has added staff members with expertise in different fields who will help move his vision forward. Their vision statement says:

The Four Trees Project aims to revolutionize law enforcement by developing and enforcing the highest standards for modern policing. Law enforcement officers and agencies should represent the absolute standard for truth, justice, and ethics, and should therefore be the guiding light of righteousness within a society. By implementing high standards for law enforcement agencies, individual police officers will be empowered to change the world.

The project operates as a non-profit group and, according to their website, funding is supplied by donations. Since no government entities are directly involved, the political obstruction that all change encounters will be at a minimum. Lt. McMillan believes that methods of policing our communities needs to change as communities change in order to be effective.

The Four Trees Project is working toward increasing the research and development of law enforcement techniques, as well as incorporating disciplines not traditionally used by law enforcement organizations to build standards so high that people will once again respect and trust their local police force.

That’s the real goal the project and its supporters are working for – citizens and law enforcement officers working together to keep our neighborhoods safe. They believe we can live in a world where the only thing a black teenager who’s pulled over by a cop is afraid of is the wrath of his parents. If enough people adopt their vision, they will be proven right.

While Lt. McMillan has positioned his organization to face minimal internal and local political roadblocks, however, the staff can still expect stiff resistance to their revolution. There’s no percentage in people getting along. Peace doesn’t generate advertising dollars, and harmony doesn’t stimulate voters. Dirty cops and dead black men are worth too much to too many people to let these problems be solved without a serious fight.

Finding the right balance will be up to everyday people – citizens and cops who are fed up and willing to make sacrifices in order to see things change. Lt. McMillan has taken a first step toward achieving the goal of safety through cooperation. It’s easy to think that following his example – whether by working in high-risk communities themselves or by funding the efforts of others – would be a more effective way for NFL players to bring attention to their cause. Thanks to Lt. Tim McMillan and others like him, opportunities are available. Those more interested in finding solutions than they are in protesting will find a way to contribute.

Go to www.thefourtreesproject.net to learn more about their work. Also, find them on Facebook at The Four Trees Project.