Greta Thunberg Vs. The Covington Boys: How The Left Treats Teens 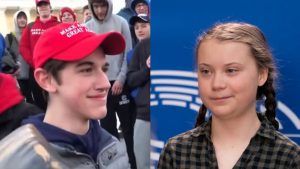 The glaring inconsistencies among leftist thought never cease to amaze.

Most recently, their treatment of Greta Thunberg, the Swedish teen wants to save the world from burning up and is entirely too young to remember when “climate experts” said we were headed into an ice age, has been interesting to watch.

After Thunberg gave a rather Shakespearian speech at the United Nations on Monday, the left pulled no punches in going after anyone who criticized the kid and smearing them as a bully picking on a child, not unlike their reaction after trotting out the Parkland school shooting survivors to give impassioned speeches about gun control.

Of course, this is all utterly hilarious to any of us with memories that span as far back as the beginning of this year, because we remember when the left was ready to burn the Covington High School boys and everything they know and love to the damn ground after the infamous out-of-context clip of their confrontation with Nathan Phillips made headlines.

The same amorphous sociopolitical blob that called for 16-year-old Nick Sandmann, whose smiling face somehow became a symbol of hatred and racism, to be doxxed into oblivion, is now scolding folks on the right for daring to criticize a child.

So, if you’re faced with anyone suffering from that variety of amnesia, here’s a handy dandy list of a few notable times the left went above and beyond merely picking on a child. To get the ball rolling, here’s former CNN host Reza Aslan declaring Sandman’s face to be supremely “punchable.”

Here, we have leftist actress Mira Sorvino, who appears to have some sort of facial expression interpretation powers the rest of us missed out on:

I hate this! It makes me sick to see those smarmy self-congratulatory expressions on their faces!

And CNN analyst Ana Navarro who included the term “racist” in her description of the teens as though it were incontrovertible fact, while simultaneously praising Nathan Phillips dubious military honor. Because CNN, of course:

Must Watch: Native-American elder taunted by racist MAGA-hat wearing teens, speaks and cries for America, the country he defended and sacrificed and wore the uniform for. It is people like Nathan Phillips who make America great.
Thank you for your dignity, sir. https://t.co/Kae7lgAFrk

And, of course, I’d be remiss not to include leftist comedian and imaginary president-decapitator Kathy Griffin, who was clearly foaming at the mouth when she called for the boys to be doxxed.

“Name these kids. I want NAMES. Shame them. If you think these fuckers wouldn’t dox you in a heartbeat, think again,” Griffin tweeted. “Names please. And stories from people who can identify them and vouch for their identity. Thank you,” she said in a later tweet.

The hypocrisy here is unfathomable.

These same people would love to see the voting age lowered for folks like Greta Thunberg (and possibly the citizenship requirements as well,) but would just as quickly feed Nick Sandmann and his entire family to a pack of wild dogs.

So, the next time you see leftist pearl-clutching over an interpretation that Thunberg’s melodrama may indicate mental instability or suggest that she’s being inappropriately used as a pawn for an evil agenda, kindly remind them of just how far the left was willing to go over the mere sight of a young boy silently smiling.