Greta Thunberg Complains About “Overcrowded” Train On Her Way Home, Forgets To Mention Her First-Class Seat 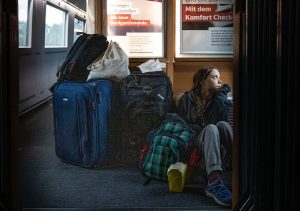 While this is arguably the most insignificant lie Greta Thunberg has told, it’s still worth considering and adding to the pile of garbage the teenage climate alarmist has been peddling on her trans-Atlantic tirade.

On her way back home to Sweden (finally,) Thunberg complained of “overcrowded” public transit and shared a stark photo of herself sitting amidst a pile of luggage.

“Traveling on overcrowded trains through Germany,” Thunberg tweeted. “And I’m finally on my way home!”

Traveling on overcrowded trains through Germany. And I’m finally on my way home! pic.twitter.com/ssfLCPsR8o

I mean, is she complaining about overpopulation, or is she just totally unaware that overcrowded public transit is the reality in the “sustainable” future she’s squawking about?

At any rate, the railway had another side to the story.

According to the Guardian, Deutsche Bahn responded to Thunberg’s tweet, writing, “Dear Greta, thank you for supporting us railroaders in the fight against climate change! We were happy that you travelled with us on Saturday in the ICE 74 … but it would have been even nicer had you also reported how friendly and competently you were looked after by our team at your seat in the first class.”

Thunberg was, of course, taken to task over her original tweet by several fine People of Twitter™:

She has a first class seat but the PR folks who are using her thought sitting on the floor will have more impact to the masses. Same way they forgot to mention that she is sailing the world on a $15m yacht

If a photo could speak a thousand words 🤭 pic.twitter.com/8Vr0TbtPsH

After being fact-checked by Deutsche Bahn, Thunberg clarified her original tweet with a little more context:

Our train from Basel was taken out of traffic. So we sat on the floor on 2 different trains. After Göttingen I got a seat.This is no problem of course and I never said it was. Overcrowded trains is a great sign because it means the demand for train travel is high!

Yeah, sure kid. I’m sure she’ll be thrilled when radical green socialism takes over Europe and she has to travel like this: