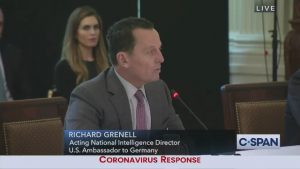 According to Ric Grenell, the former acting director of national intelligence, the U.S. is being “aggressively alarmist” concerning the tension between Russia and Ukraine and has “shoved aside diplomacy” in favor of talking about war.

Grenell’s comments were made during testimony given during a virtual hearing on Wednesday.

“We are rejecting the tools that the United States has in terms of sanctions,” Grenell, who did an interview with Newsmax in December as a national security contributor and executive for international partnerships, went on to tell the lawmakers in a summation of his written testimony.

“Testimony was also offered by Michael McFaul, director of the Freeman Spogli Institute for International Studies at Stanford University; retired Lt. Gen. Ben Hodges; and Dr. Andrea Kendall-Taylor, director of Transatlantic Security Program at the Center for a New American Security, with all the participants taking part in a question-and-answer session with the subcommittee,” Newsmax reported.

Grenell, however, went on to point out that none of the witnesses talked about the Nord Stream 2 pipeline, including sanctions on it, during their summations.

But Grenell said he can’t think of something “more callous than to wait for bloodshed to be put on the TV screens before we make a move on diplomacy and Nord Stream 2.

He added that the Germans “undermined us when it comes to Nord Stream 2.”

Grenell also called it “shameful” for Washington to be raced toward military options rather than using diplomatic tools that would cripple Putin and deny him the money he needs to go on the offensive, and not to discuss the pipeline.

“It is typical of Washington and all of the pundits that race to talk about war instead of utilizing diplomacy, sanctions, and the tools of the U.S. government,” Grenell continued. “They are incredibly important, and yet official Washington is talking about troops, and build-up, and literally pushing aside the diplomatic response. I find it to be shameful.”

He then went on to add that the aggressive talk is not based on verified intelligence.

“Sometimes we get it right, and sometimes we get it wrong,” said Grenell, noting that intelligence has also been overestimated in several other issues, such as on North Korean leader Kim Jong Un being “brain-dead,” that former President Donald Trump had been a Russian asset, “wrong,” and the fact that 50 intelligence officials signed a letter one month before the 2020 election “saying do not look at Hunter Biden’s laptop because it is Russian disinformation. Wrong.”

“Lastly, let me just say that official Washington is also wrong when it comes to NATO unity,” said the former acting director of national intelligence. “The Germans are undermining NATO. Many NATO members are not paying their fair share and obligations.”

Grenell then said he is in agreement with Ukraine President Volodymyr Zelinskyy’s comments about how U.S. policy is failing to deter Putin and is instead “ruining our ally Ukraine’s economy.