Grandfather Of Cannon Hinnant Gives Heart Wrenching Comment At Funeral: ‘We Shouldn’t Even Be Here’ 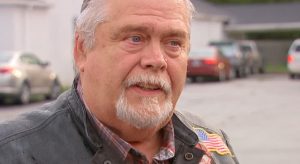 The funeral for slain 5-year-old boy Cannon Hinnant was held on Thursday, where his grandfather, Merrill Race, distraught over the entire situation, gave a statement to the media that is absolutely heartbreaking.

Hinnant, white, was murdered by a black neighbor in his own front yard. The child was shot point-blank in the head in front of his two sisters while riding his bike in Wilson, North Carolina.

Cannon’s grandfather, Merrill Race, distraught, told ABC11, “We shouldn’t even be here.” His grandson, who was supposed to start kindergarten this week, was a “beautiful kid” who loved playing outside, said Race.

Race said of Darius Sessoms, the 25-year-old neighbor who has been charged with first-degree murder of Cannon, “That’s evil. I never met this guy in my life, but that is one evil dude. He’s there where he should be.”

“It’ll never be behind us,” Race, a member of the local Guardians of the Children, concluded. “He’ll always be with us, but we’re going to get through it.”

One of the big issues with this case has been the lack of mainstream media coverage surrounding it. This has led many individuals to assume that the reason major networks are avoiding the story is because to cover it would undermine the racial narrative they are trying to push right now in their collective effort to destroy Donald Trump.

Please keep this precious family in your thoughts and prayers. Also, let’s hope the justice system seeks the death penalty against Sessoms. He’s certainly earned it.